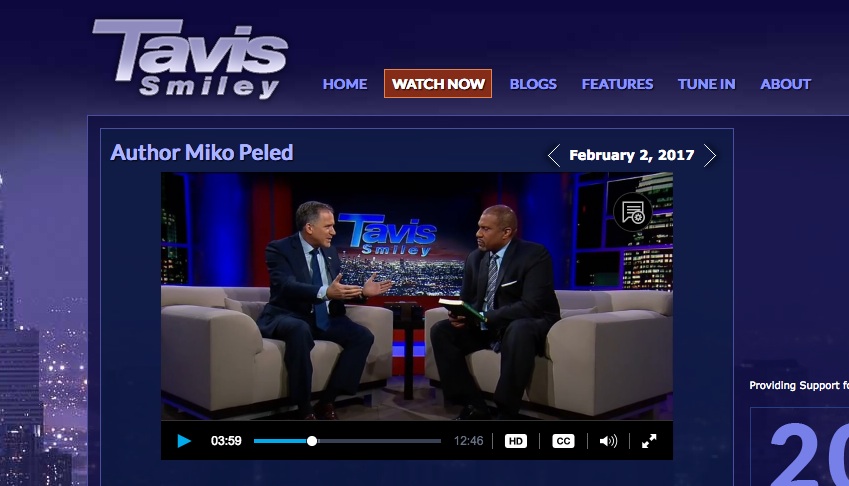 On February 2, PBS’s Tavis Smiley Show featured a very intelligent and calm, 13-minute discussion between the host and Miko Peled, the Israeli-American author of The General’s Son: Journey of an Israeli in Palestine. During the discussion, Peled was given full opportunity to present both his critique of the concept of Zionism and his arguments as to why a “two-state solution” between Israelis and Palestinians is no longer possible.

This discussion is particularly timely, given the presence in Pres. Donald Trump’s close entourage of many people (including his nominee for Ambassador to Israel, David Friedman) who also do not believe in a two-state solution– though for reasons very different from Miko Peled’s.

Having a discussion like the one that Peled had with Tavis Smiley happen in the mainstream U.S. media should not be “notable” in any way. But as Palestinian-rights activists long ago discovered, the vast majority of U.S. big media has for many decades now silenced or suppressed voices critical of Israel– whether of its current policies or of its founding idea, Zionism.

Miko Peled’s critique of Zionism is particularly significant, given that (as is well recounted in the book) in 1948 his grandfather Avraham Katznelson, a longtime emissary of the Zionist movement, was one of the signers of Israel’s Declaration of Independence– and his father, Matti Peled, had been a high-ranking general in the Israeli military.

In the recent TV interview, Tavis Smiley started by asking Peled how his current views would juxtapose with those of his grandfather or father. Peled answered forthrightly:

With my grandfather, there’s no way… This idea that you come from Europe, take over the land from the people who were there, kick them out– I don’t see how you can legitimize that… But those were different times, times when Europeans could come to other countries and do what they wanted. That was what Zionism was all about…

Peled noted that the period after the 1967 war was the time when his father, having left the military, came out as strong advocate for a two-state solution. But he also noted that was a period in which,

the entire Israeli establishment, the military and the government, did everything they could to make that an impossibility. They integrated the West Bank [to Israel] to the point where there really is no ‘West Bank’ today…

Jews and Palestinians, whether in the West Bank or in Israel, live very close to each other geographically, even though completely segregated. So geographically, it’s impossible to do. There is no area you can slice out and say ‘This will be an Israel and this will be a Palestine’.

He then considered the plight of the five million Palestinian refugees who are still today, 70 years after they were expelled from their homeland in 1947-48, living “miserable” lives in refugee camps, stating clearly that “They have the right to return– and their homes are generally not in the West Bank, but in Israel itself.”

The whole of Peled’s February 2 interview is well worth listening to. In it, he makes several powerful arguments why the whole area of Palestine/Israel should be a single, democratic state. “It is s single state already,” he said. “And it has been for decades.” He also said, “I don’t see the need for a Jewish state because the Jewish state is precisely the problem. You can’t have a Jewish state in Palestine without infringing on the rights of the indigenous people, which are the Palestinians.”

Peled’s argument for a single democratic state in the whole of Palestine/Israel echoes the call the Palestine Liberation Organization (PLO) issued back in 1968, for the establishment of a single, avowedly secular democratic state in the whole area. From 1974 onward however, the PLO started moving toward the idea of calling for a smaller, Palestinian “mini-state” in the West Bank and Gaza that would coexist alongside an Israel that would withdraw to its pre-1967 borders. In 1988, PLO leader Yasser Arafat stated his first explicit recognition of the State of Israel; and in 1993, he concluded the “Oslo Accord” with Israeli Prime Minister Yitzhak Rabin. Under the accord, the two sides committed to completing negotiations for a final peace between them by May 1999, and pending conclusion of that final peace treaty, the PLO was allowed to establish a very limited, interim governing body in the West Bank and Gaza.

The 1999 deadline for conclusion of a final peace came and went with the peace treaty still nowhere in sight. And meanwhile, after the Oslo Accord as before it, Israel continued implanting throughout the whole West Bank, additional Jews-only colonies (an action explicitly forbidden under international law.) That situation led to the extreme demographic/geographic mixing that Peled alluded to.

Throughout the past 20 years, support among Palestinians worldwide– including the 1.2 million ethnic Palestinians who are citizens of Israel– for the idea of a mini-state alongside Israel has dwindled to very low figures. The vast majority of Jewish Israelis, however, still support the idea of keeping a strongly Jewish state in the region within borders that may be larger or smaller (but anyway, would be very much broader than the borders the Jewish state was allotted in the UN’s 1947 plan for the Partition of Palestine.)

There are now many strong parallels with the situation in Apartheid South Africa. There, from the mid-1950s on, the vast majority of non-“White” South Africans supported the idea of a single democratic state in the whole of South Africa, while most “White” South Africans still supported a White-dominated political system. Within “White” society, however, there were always some visionaries who upheld the idea of the equality of all human persons and thus, the establishment of a single democratic state in their country.

Over the decades, those visionaries played a key role in persuading their fellow “Whites” that it would be better for them and everyone else if they started to negotiate with the non-“White” South African leaders on a basis of human equality and equal rights, rather than continuing down the path of endless oppression and endless violence that would be necessitated if they wanted to uphold the Apartheid system.

Miko Peled is one of relatively few Jewish Israelis who (as yet) are ready to pursue a political vision based on the concepts of human equality and equal rights. It is excellent that his voice– and the voices of all the other people, whether Palestinian, Jewish, or neither, who espouse similar principles– can now be more widely heard.