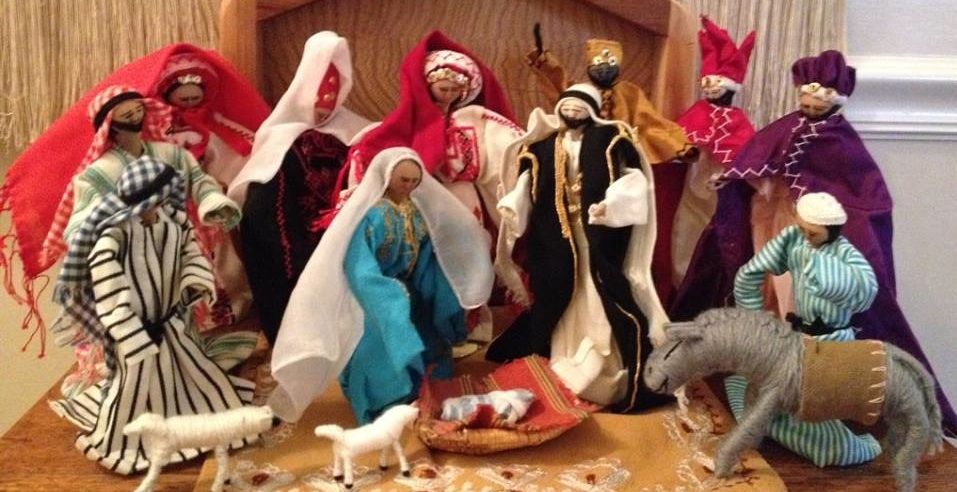 Jesus of Nazareth, who would grow up to become an amazingly inspirational teacher, was a Jewish Palestinian who was born at a time when Palestine was under the brutal rule of a foreign military occupation. Because of some completely arbitrary regulations imposed by the occupiers, his mother Maryam (Mary) was forced, when she was heavily pregnant, to take a difficult ride by donkey from where they were living, Nazareth, in Galilee, to Bethlehem in the distant hills south of Jerusalem.

Nazareth is the present-day Palestinian city of Nasera, which is in the north of the present-day Israel. Many of the Palestinian Christians who live in and around Nasera today are descendants some of Jesus’ first-ever followers, many of whom came to him from that whole area of Galilee.

Back when Maryam and her fiance, Joseph, were forced to make the trek from Nasera to Bethlehem, you can imagine how many difficulties they encountered along the way, what with the checkpoints and the bullying foreign soldiers harassing everyone who needed to cross them…

Then, when they got to Bethlehem, they found the city packed with other people who’d also been ordered to go there by the foreign soldiers, and the innkeepers in Bethlehem didn’t want to provide any rooms to these migrants. Maryam was about to give birth! Where could they go?

Some farmwomen in the area offered them refuge in a stable, which was better than nothing, and Maryam was able to have the baby there. And so Jesus (known in their language, Aramaic, as Issa) was born in a stable, to a not-yet-married mother. He was an outsider from the very beginning.

The Jewish people– and others– in Palestine at that time were having a very hard time of it because of the military occupation they lived under, which was run by the Roman Empire. But the Jews had some longheld traditions that they would one day be saved by someone born in Bethlehem, a town located about six miles southwest of Jerusalem.

After Jesus was born, some of the shepherds and other people from around Bethlehem started to think that Jesus might be the one who was sent to save them. And the word soon got out that this was indeed the baby who’d been sent to save the world. (Interesting to think how that happened in the days before Youtube… but word-of-mouth has always been a powerful force.) Some months later, there were even three very wise men who lived in countries further East—perhaps in present-day Iran, or Oman—who said that they too had heard about this miraculous baby and they wanted to come to visit him.

But the three wise men made a bad mistake. You see, the Romans didn’t rule over Palestine directly, but they’d installed a powerful local contractor to rule over Palestine in their name. He probably made a lot of money from doing this. He was named Herod, and he called himself the King of Judea. He was very cruel. Some historians say he even murdered three of his own sons.

So when the wise men came from the east to look for the miraculous baby, they asked some of Herod’s officials where this baby might be. That immediately got Herod and his officials concerned. They worried that the baby might grow up to challenge Herod and the very lucrative deal he had with the Romans. So the officials said to the wise men: “When you find this baby, be sure to come back and tell us where he is!”

These wise men, like many people back in those days, were really good at finding their way to places by looking at the stars at night and figuring out from them which direction to travel in. They had seen one unusually bright star, and decided maybe if they went toward it they could find the miraculous baby. And it worked! The star led them straight to where Maryam, Joseph, and the baby were.

When the people there in Bethlehem saw the wise men visiting Jesus, and giving him some super-special (and expensive) gifts, this strengthened their belief that Jesus was indeed the promised one. But when the wise men told Maryam and Joseph about his conversation with Herod’s officials, they were very scared. They told the wise men absolutely not to report back to Herod’s officials–which they didn’t. They left Palestine soon after, going back to their own countries.

Herod pretty speedily figured that the wise men had double-crossed him. He also learned from the many spies he had all around the country that the wise men had found the baby they were looking for– in Bethlehem. He was really angry! He told his soldiers to go to Bethlehem and kill every baby there who was under two years of age.

Maryam and Joseph had already decided that their baby was attracting too much attention for them all to be safe, and that they needed speedily to leave not just Bethlehem but the whole of Palestine. Once again, they had a difficult journey to make, still with their trusty donkey. This time, once again dodging the checkpoints, they went to Egypt; and this time they had a baby to take with them, too.

Meanwhile, in Bethlehem, Herod’s soldiers went to work, going house to house to kill all the babies. It was such a horrible scene. No-one knows how many babies were killed, but it was really, really sad for everyone in the city.

A few years later, Herod died. Maryam, Joseph, and Jesus traveled quietly back to Palestine, going to Nazareth where they both had families. That’s where Jesus grew up and went to school. As a teenager, he started preaching to people about such important things as the need to be kind to everyone, especially people poorer or weaker than yourself… and the need not to demonize your enemies but to find peaceful, respectful ways to end your conflicts with them, instead.

Over the years, his teachings attracted a wide following, and he became known as “Jesus Christ.” (“Christ” is a Greek word for “the promised one.”) His early followers were all, like him, Jewish Palestinians who were looking for a way to live an ethical life even under the violent rule of the Romans. Still, to this day, there are strong communities of Christians in that area—in present-day Palestine, Israel, Syria, Lebanon, Jordan, and Egypt—whose families and traditions date back to some of Jesus’s earliest followers.

But one of the earliest teachings of the young Christian community was that their new religion was not just for these dissident Jews, but rather for everyone who wanted to follow Jesus’s teachings, whatever their ethnicity. Because of this, very soon there were Christian communities in Turkey, Iraq, Iran, India, and even China. Christian beliefs spread from Egypt into Ethiopia and right across North Africa. This all happened, by the way, long before there were any Christians at all in Western Europe—or, of course, in America. Many of those other very ancient Christian communities still exist today.

One of the things the early Christians did was start to organize their calendar based on events in Jesus’s life. The first of the seven key events they chose for this new calendar was the “Nativity”, that is the birth of Jesus. That is the origin of what we now call Christmas. The word “Christmas” means that this was the day on which those early Christians held a special “Mass”, which was a ritual they had developed, to celebrate the coming of Christ.

For a long time, the Romans who ruled over Palestine and most of the Mediterranean didn’t like the Christians at all, and they continued to persecute them horribly whenever they could. But in around 400-500 CE, a number of things happened that changed the Christian religion into something like what we know today.

Firstly, a Roman Emperor called Constantine himself became a convert to the Christian religion! Well, that was a huge change. Almost overnight, in the Mediterranean region, Christianity changed from being the belief of a string of separate and nearly always persecuted groups of people to being the religion of the Empire itself.

Lots of things about the religion itself started to change, too. One big change was that, with Christianity overnight becoming the religion of empire, leading thinkers in the church, led by a bishop from North Africa called Augustine (later “Saint Augustine”), suddenly started to ague that some wars could be okay to fight—or, as he said, “just”. That was very different from the commitment to pacifism of the early Christian communities.

Several Christian preachers also started to teach that getting rich was a good thing to do, without thinking much at all about the needs of our fellow humans who don’t have enough to eat, or a decent home to live in.

All of that was very, very different from the original teachings of Jesus of Nazareth, who said things like, “Blessed are the peacemakers”, and “It is easier for a camel to pass through the eye of a needle than for a rich man to get into heaven.”

Similarly, the way many people celebrate Christmas today is very different from the way that Jesus and his family, and their friends among the sheepherders of Bethlehem so long ago experienced Jesus’s birth.

Today, it seems that a lot of “Christmas” celebrations in many countries are all about shopping and buying and eating lots of unnecessary things. So it’s good to go back and try to learn and remember as much as we can about what happened at the time that Maryam and Joseph gave birth to their little boy in Bethlehem, so long ago.

Their lives were hard. They lived under a foreign military occupier whose local contractor, Herod, was brutal and could boss them around exactly as he wanted. His officials forced Maryam, Joseph and countless other Jewish Palestinians to make dangerous trips. And even though Maryam and Joseph escaped from Bethlehem with Jesus before Herod’s massacre of the children there, so many of the people who had helped them during their time in Bethlehem were unable to save the lives of their own children. The whole community was probably traumatized by the atrocities Herod inflicted.

By the way, Bethlehem is still there. It’s a large, crowded city in Palestine. (The Arabic-language name for it is “Beit Laham”, which means “House of meat.”) Its people once again live under the brutal rule of a foreign military occupation force—and they’ve been living like that for over 50 years now.