One the evening of September 12, a new “Cessation of Hostilities” agreement that had been negotiated primarily by the United States and Russia went into effect in Syria. Despite this move by Washington to (we hope!) help to de-escalate the conflict that has tortured Syria for so long, most American citizens still know little or nothing about conditions in the government-held parts of Syria that still house a majority of the country’s people.

Antiwar activist Judy Bello was part of a seven-person delegation from the U.S. Peace Council that recently made a week-long visit to Syria. She returned with a strong conviction that, “The United States needs to get out of this war completely.”

The words and witness of Bello and her fellow delegation members have particular impact at a time when very few representative of the big, corporate U.S. media have been doing much direct reporting from inside Syria. Many journalists with the big media outlets who cover Syria are located outside the country and base their reporting on “Skype” interviews with anti-government activists based in insurgent-held areas, whose accounts are very hard to verify.

Bello is a member of the Administrative Committee of the United National Antiwar Coalition. She also works with the Fellowship of Reconciliation and is a leader of the Upstate (N.Y.) Coalition to Stop the Drones and End the Wars.

“I don’t believe many people in the U.S. believe that the U.S. has nothing to do with the violent influx of foreign fighters into Syria, since they’re all coming from U.S. allies,” she said, stressing that, “This is a U.S. war [against Syria], and actually Hillary Clinton has talked about escalating it and getting rid of Asad.”

The delegation that Bello was part of had been invited to visit the government-held areas of the country by Syria’s ambassador to the United Nations, Dr. Bashar Ja’afari– but delegation members were all at pains to point out that they had paid their own way. “This was our trip,” Bello said. “It was not a Syrian government trip. It was something the U.S. Peace Council very much wanted to do.”

The delegation held meetings with numerous professional organizations, aid organizations, religious figures, and students while they were in Syria, along with parliamentarians, the Minister for Reconciliation– and Pres. Bashar al-Asad.

Asked for her takeaways from that meeting, Bello said:  “He’s kind of a quiet  person, softspoken, with a wry sense of humor… We had a lot of serious questions for him. At the end, we asked him ‘What’s most important to you?’ He said it was having a secular and tolerant community where people can work together to build society.”

Bello said that she had seen many indications that the population of the government-held areas the delegation visited– which included two majority-Chirstian towns outside Damascus, as well as several different areas of Damascus itself– upheld those values of inter-religious tolerance and respect for diversity.

One example she gave was of a project they visited, run by the Syrian Development Trust, where women recently widowed by the war were being trained as seamstresses. “I assume that many of these women were widows of soldiers killed in battle. Many were wearing hijab and a lot also wearing the long coat that’s part of the conservative Muslim dress code. But most of the teachers were wearing Western-style clothes and didn’t have their hair covered– and there didn’t seem to be any tension between them over this cultural discrepancy.”

Bello said she had found the visits to the two majority-Christian towns very moving. These were the towns of Sednaya and Ma’aloula, to the northwest of Damascus. Both towns host important, Orthodox Christian  institutions that date back to the very earliest days of Christianity. (Ma’aloula is renowned as a place where some of the townspeople still speak a form of Aramaic, thought to be the language of Jesus.)

“Ma’aloula was targeted by the militants because they want to get all the Christians out of Syria,” Bello said. She said the delegation members had been told that the townspeople had gotten advance notice of the anti-government militants’ impending attack– “and they’d all left, except the priest, who stayed with his family in the church, which is a very ancient shrine to Saint Taqla. His son and brother were among those killed by the militants.” 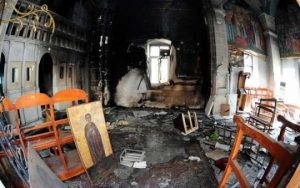 A church in Maaloula badly damaged by anti-government militants, 2013

“They destroyed part of that wonderful old church,” she said. “It was very sad to see this reckless destruction.”

She described herself as “blown away by how non-combative people are between religions there. There was very little sense of any tensions between religions in the areas where we traveled. People would say things like, ‘Well, it would be rude to ask someone what their religion is… That’s part of your private life’.”

She recalled that, when the delegation met with the Grand Mufti of Syria, the head of the Sunni Muslim community in the country, he had described himself as “the Grand Mufti of all 23 million Syrians, regardless of their religious affiliation.” Then, when they met an Orthodox Christian bishop in Damascus, he had echoed that sentiment saying that he considered all 23 million Syrians to be part of his flock.

Bello provided a quick picture of what life seemed like in the parts of government-held Syria the delegation visited:

There were some shortages of goods. And everywhere we went we heard horror stories of people losing loved ones to the war… It seemed that some people had been deliberately targeted by the militants– people who were journalists or political activists.

From the standpoint of people in the government-held areas, the areas held by the militants are described as ‘occupied’. So there are lot of people living in those areas that came under the control of the militants– and it’s like when the Mafia comes to town: What do you do? Do you leave, or do you stay and just put up with the danger because you don’t want to lose your home? There is a whole lot of stress involved in living those areas.

In Damascus, we heard a certain amount of shelling, going out, into militant-held areas…

Then, there are always attacks by the militants across the boundaries, into the government-held areas. When I was there they hit a restaurant and killed eleven people, including a pregnant woman and her young child.

She said that both during this visit and during a visit she had made in 2014, to serve as a monitor for elections held in Syria that year, she saw many signs of the presence of the internally displaced people (IDPs), large numbers of whom have fled from the militant-held areas and found refuge in the government-held areas:

A lot of the displaced have moved in with family members. But there are a lot of people who have no place to go, and the president has said clearly that he doesn’t want to see anyone in the country living in a tent. So they’ve been building cheap housing for the internally displaced, and putting them into schools and also in some places into the buildings associated with churches or mosques.

So life is not great for them, but they’re eligible for government assistance. They get food and medicines; their children go to school; and they have running water. Plus, if they have a skill, they can go out and get a job.

Later in the conversation, she said,

If our government took all these U.S. resources and the U.S. weapons out of Syria, the Syrian government’s reconciliation program would work much more quickly and efficiently. And it is a grassroots reconciliation program, which is very very different from having a meeting at the United Nations with a lot of Syria’s enemies and a few of its friends and deciding how to divide it up…

She expressed enthusiasm for the government’s reconciliation program

The Syrian government is defending itself and its people, which is a normal reaction for a country under attack. At the same time, in the midst of this, they’ve initiated a reconciliation program that’s given amnesty to thousands of people in areas they’ve been able to recover from the militants– areas around Homs and in the south of Syria, and recently in the liberated area of Darayya…

Yes, the government did ‘win’ in these areas. But they’ve been going in and rebuilding housing.

In Darayya, they even bussed people from there who didn’t want to stay, up to Idlib, where they’ll be with the insurgents there. They sent them away. They didn’t kill them or put them in jail. But people who were willing to lay down their arms were allowed to rejoin the community, no questions asked.

She admitted that, “There’s a lot of cynicism about this process in the U.S. press.” But she argued that in the areas where this procedure had been applied before,

it worked. People have been able to restore themselves within their country.

One explanation I heard for this was that people were drawn into the conflict for many reasons, not just because they were militant fanatics, but because a war broke out all around them and they were confused, they had to decide quickly. Or, they were threatened or their family was threatened: ‘Either join us or we’ll kill you or kill your family’. So a lot of people in those areas didn’t want to be at war.

She expressed guarded optimism that the reconciliation process the Syrian government has been pursuing in areas like Darayya could succeed:

I believe the Syrian country can come back together. But it can’t do it so long as there’s constant international pressure and constant lies in the international media aimed at keeping that pressure going and making it popular among westerners.