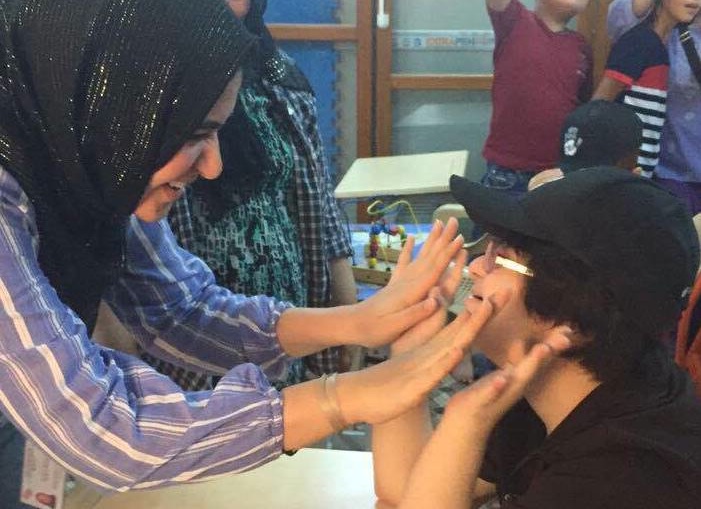 Dr. Sarah Ahmed knows the effects of the brutality meted out by ISIS– also known as “Da’esh”, or “the Islamic State”– better than most people. As Director of Operations for the UK-based Foundation for Relief and Reconciliation in the Middle East (FRRME) she deals up close and very personally with survivors of ISIS’s violence. In quiet moments, she will talk about trying to provide healing for girls of eight or nine who have escaped from being held by ISIS as sex slaves… And if you go to this page on FRRME’s website, you can learn about ISIS’s truly Nazi-style policies of “euthanizing” children with disabilities– and you can see Dr. Sarah playing with some of the children and families who escaped from that particular horror.

So this very capable young Iraqi leader is someone whose views on how to deal with ISIS should be widely heard and thoughtfully considered by political leaders all around the world.

She is deeply opposed to the idea that military violence is the way to respond to ISIS’s violence.

“Airstrikes,” she says, “have killed more civilians than ISIS has.”

She bases her analysis not only on the effects she observes of the military campaigns Western and other nations have employed against ISIS, but also on her understanding of how the people in ISIS became so violent in the first place: “The war created ISIS,” she says. “The 2003 war, that is.”

“Before, we had Saddam Hussein here. We had one dictator. Now we have hundreds that want to be him… If we brought more war to defeat ISIS, then something worse than ISIS will come.”

What she believes will work better than war is a patient campaign using inter-religious reconciliation and other nonviolent methods to chip away at the basis of ISIS’s support. FRRME has been very involved in such efforts, which it pursues in tandem with the work it does in the refugee and Internally Displaced Persons’ camps in northern Iraq, in which the many families and communities who have escaped from ISIS’s persecution have found a temporary refugee.

The persecutions and the flight of the terrified survivors still continues.

You can listen to Dr. Sarah speaking in her own words on this episode of the Just World podcast. Her words deserve to be widely heard and understood.