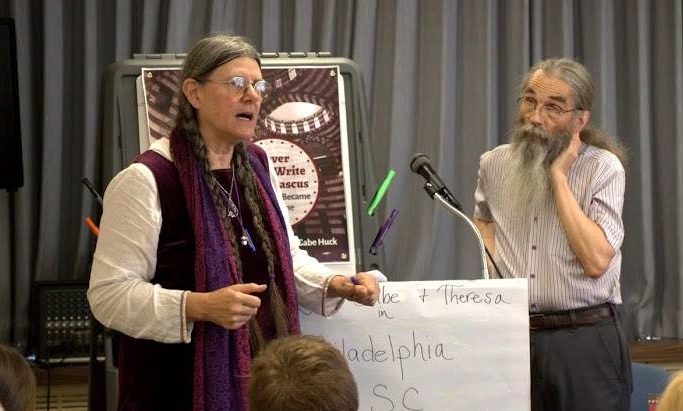 At two New York City events in early June, two amazing educators and humanitarians, Theresa Kubasak and Gabe Huck, launched Never Can I Write of Damascus: When Syria Became Our Home, their memoir of the seven years they spent in Damascus, 2005-2012.

At both events, copies of the book sold out! (Disappointed attendees learned they can order the book from their local bookstore, Amazon, or our website.)

The first event (in the photos here) was held in downtown Brooklyn’s fabulous Book Court bookstore, June 5th. At this event, the authors were introduced by Dr. Linda Jacobs, author of the recently released study Strangers in the West: The Syrian Colony of New York City, 1880-1900, who also fielded the questions during the Q&A session.

At this book talk, as at the one that followed it two days later, Kubasak and Huck opened the event with a minute of silence in solidarity with the much-suffering people of Syria.

Since Ramadan was about to begin, the excerpts from the book that they’d picked to read at Book Court were some of the very moving descriptions they had included, of what it was like to experience Ramadan while they were in Damascus.

In their book talks– as in the book itself!– the authors repeatedly noted how friendly and welcoming they had found the Damascus residents who were their neighbors as they lived in four different neighborhoods of Damascus. They also noted the rich diversity of the city’s ethnic makeup and culture. They stressed that their experience during the seven years they lived in the city completely belied the impressions most Americans have of life in Syria. They noted how many times they had been asked by Americans whether they were “scared” to be living in Syria, and noted that had encountered nothing but friendship and hospitality from the numerous Syrians they had met there.

The second launch event for Never Can I Write of Damascus was held in a lovely meeting-room at the U.N. Church Center, overlooking the U.N.’s distinctive headquarters building in midtown Manhattan.

It was co-sponsored by Just World Books and  the NGO Working Group at the U.N. for Israel and Palestine. Former Working Group co-chair Doug Hostetter, who heads the Mennonite Central Committee’s office at the U.N., welcomed attendees. (Hostetter is also a key contributor to The People Make the Peace: Lessons from the Vietnam Antiwar Movement, which was published by Just World Books in September 2015.)

When Kubasak and Huck first moved to Damascus in 2005, they did so with the aim of learning Arabic there– and also of finding some way to start helping some of the 1.5 million Iraqi citizens who had fled there for refuge during the tumultuous early years of the U.S. military occupation of their country. Soon enough, as the authors explained, they decided that providing educational help and mentoring to refugee youth would be the best contribution they could make, since for Iraqi refugees in Syria (as for refugees everywhere), education is one of the few assets they can attain that is very portable and that is hard for oppressive others to take away. Also, Kubasak was already a practised and very innovative educator, with many years of teaching experience in her resume.

When they started the Iraqi Student project (ISP), they received some useful advice from Hostetter, who had run a student-mentoring project for refugee youth from Bosnia during that country’s civil war, more than a decade earlier.

During the five years that ISP was running, 2007-2012, its two founders– aided by a rotating faculty of other native English-speakers who were spending time in Damascus– held rigorous daily skills-building sessions with young Iraqis who sought to build on their existing English-language skills to win admission to U.S. universities. At the same time, the two educator/activists kept in good touch with a growing network of supporters back in the United States, with whose help ISP was able to win good scholarships or tuition waivers for graduates of the ISP program, at colleges around the United States.

Kubasak and Huck also helped the ISP students in Damascus navigate the complex process of preparing and sending in their college applications– and the even more complex process of getting the U.S. visas they would need to arrive at their college placements. In every community that would be hosting ISP students, Kubasak, Huck, and their friends also found families to act as strong local “support groups” for the students.

Over the five years in which they ran the ISP, Kubasak and Huck were able to send more than 60 very well-prepared young Iraqis to study at four-year colleges in the United States. The last cohort of those students graduated just weeks ago.

Some of the alums of the ISP program have gone back to use their skills in their home country– which was the original strong aim of the project. Most, however, have been prevented from doing so by the terrible conflict that continues to roil the country, thirteen years after the U.S. invasion. A growing number of ISP alums, however, are involved in projects to help victims and survivors of that violence– whether from inside Iraq or from further afield.

Never Can I Write of Damascus has received some very strong endorsements from figures like international-law specialist Richard Falk, Iraqi scholar Hala Fattah, and political scientistNubar Hovsepian. You can read all of those endorsements here.

It provides a look into real life in Syria, which is a wonderfully refreshing counterpoint to the crude stereotypes most outsiders hear. At the same time, it gives us reason to lament the rash blindness that led outsiders to crash into that country and help tear it apart.

At the book’s launch events in New York, many longtime supporters of Kubasak and Huck’s work were able to come and celebrate the appearance of their book. Other attendees had come to learn more about a country, Syria, about which they admitted they felt woefully ill-informed. Several said afterwards that prior to hearing Huck and Kubasak give their presentation, their images of life in Syria had come mainly from the (often demonizing) caricatures portrayed by the U.S. mainstream media.

As part of a class they took on the politics of map-making, these recent graduates from the Cooper Union College had hand-painted the lovely series of maps included in the book.

After the second of their New York City events, Kubasak and Huck left quickly to travel to Philadelphia. There, they were scheduled to give another talk about the book. They were also looking for college placements and “support group” families for some of the Syrian young people with whom they’ve been working– often by Skype– as the young Syrians struggle to find a way out of the difficulties they now face, as refugees in Turkey.

The work of these inspiring and visionary humanitarians carries on. Just World Books is proud to publish their beautiful work of witness to the many rich experiences they had in Damascus.

JWE people, what do you think the U.S. government could do to help end the suffering of refugees from Syria, Iraq, or elsewhere? We welcome your courteous comments below.