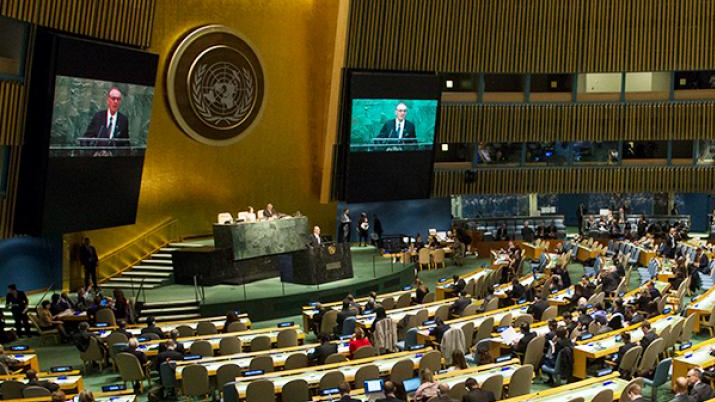 We are pleased to crosspost this piece from JWE Board Member and International Jurist Richard Falk’s blog, Global Justice in the 21st Century.

Prefatory Note: Every year since 1945 some account is taken of the legacies of the atomic attacks between August 6-9. This year this legacy takes two quite different forms at the NPT Review Conference; First, the nuclear weapons states are confronted by their failure to comply with the Article 51 disarmament commitment in the form of a treaty initiative from the Global South that calls for the comprehensive prohibition of the weaponry. The second development is the geopolitical crisis brought to the surface of world politics by the Ukraine War.

77 Years After Hiroshima and Nagasaki

Peace activists around the world often choose August 6th and 9th each year to grieve anew the human suffering and devastation caused by dropping atomic bombs on the virtually undefended Japanese cities of Hiroshima and Nagasaki, which possessed scant military significance. Among other things these atomic attacks were ‘geopolitical crimes’ of ultimate terror, with flimsy combat justifications, seemingly mainly intended mainly as a warning to Soviet leaders not to defy the West in the Pacific dimensions of the peace diplomacy at the end of World War II. This mega-terror event was also justified, especially at the time, as ‘saving American lives’ that were presumed to be lost in the event that the U.S. had to bring the war to an end by invading the Japanese homeland. Historians still disagree about whether Japan would have surrendered if a diplomatic approach to ending the war had been attempted, but the fact that it wasn’t is itself an indictment of the atomic bomb attacks.

These August dates marking the utter destruction of these two Japanese cities and the large residue of suffering that lasted for decades are treated by the world as events giving rise to what has become widely known as the nuclear age, perhaps by now superseded by what is called the digital age. This awful beginning of the nuclear age can, however, never be forgotten or redeemed, although ever since the explosions in 1945 the solemnity of these memorial occasions has been overshadowed outside of Japan by widespread fears that a nuclear war might occur at some point and a quiet rage continues to build around the world that the nuclear weapons states, above all the U.S., have stubbornly refused to take steps to fulfill pledges to choose a reliable path to nuclear disarmament in good faith.

This pledge was initially a matter of prudent politics and elementary morality. The pledge became legally obligatory in Article 51 of the Nuclear Nonproliferation Treaty (1970), a clearly depicted disarmament commitment affirmed unanimously in an Advisory Opinion of the International Court of Justice in 1996. It has become clear that for the security establishments of the ‘NATO Three’ (U.S. France, UK) disarmament was never more than ‘a useful fiction’ that conveyed the sense that the non-nuclear states were being given a fair exchange commensurate with their willingness to give up their conditional option to underpin at sone point national security by acquiring nuclear weapons (as Russia and China, as well as Israel, India, Pakistan, and North Korea have done over the decades for a variety of reasons in distinct security settings). The non-nuclear Parties to the NPT are not formally obliged to give up their option of acquiring nuclear weapons unconditionally. Article 10 of the treaty confers on all Parties a right of withdrawal if “extraordinary events… have jeopardized the supreme interests of its country.” In practice, as Iran is finding out, this right of withdrawal gives way to the geopolitical priorities of an enforcement regime presided over by the United States, and it appears that the geopolitics of containing Iran takes precedence over its treaty right of withdrawal. The so-called The Jerusalem U.S.-Israel Strategic Partnership Joint Declaration signed in July by U.S. and Israel leaders commits the U.S. to using whatever military force is necessary to prevent Iran from acquiring nuclear weaponry. A completely unlawful undertaking that amounts to a threat to use non-defensive force, a violation of Article 51 of the UN Charter.

NPT Review Conference at the UN

Currently the NPT Review Conference held every fifth year, this time postponed since 2020 because of COVID, is taking place at UN Headquarters in New York City. Two significant contradictory developments have dominated the scene. It was the first such meeting of NPT Parties since the Treaty of Prohibition of Nuclear Weapons (TPNW) came into force in early 2021. This treaty, largely a project of governments from the Global South in active coalition with Global Civil Society has drawn a bright line between the majority views of the peoples of the world and the security elites of these nine nuclear weapons states.

Indeed, the NATO Three had the temerity to issue a joint statement expressing their total opposition to the approach taken by the so-called Ban Treaty (TPNW), declared it was their intention to continue to rely on nuclear weapons to meet their far-flung security needs broadly specified to include geopolitical deterrence, that is, not only is this weaponry not being limited to the defense of homelands but is extends vital strategic concerns that could potentially arise anywhere on the planet. At present, this commitment to nuclearism is illustrated by the U.S. posture in response to the Ukraine War and the future of the One China approach that has prevailed since China and the U.S. established diplomatic relations. These countries steadfastly oppose even a “No First Use” framework of restraint that would in theory prevent any reliance on threats or uses of nuclear weaponry. This impasse between the nuclear haves and have-nots amounts to an existential confirmation of ‘nuclear apartheid’ as the precarious and self-serving underpinning of global security unless and until the advocates of the TPNW approach muster enough strength and political energy to mount a real challenge to such a hegemonic and menacing concentration of unaccountable power and discretionary authority.

The second notable development at the NPT Review Conference lent a sense of immediacy and urgency to what had become 77 years after Hiroshima a somewhat abstract concern is the Ukraine War. The geopolitical spillover effect of heightening the perceived risks of the use of nuclear weaponry generated the most widely felt fear of nuclear war of nuclear war since the Cuban Missile Crisis of 1962. The U.S. decided it was worth the risks to challenge Russia’s attack on Ukraine sufficiently to preserve its strategic mastery of global security since the end of the Cold War incorporating the view that the world is better off if political space exists for only one extraterritorial state. Such a Global State would became the sole custodian of global governance when it comes to the international security agenda. Among other things, this unipolarity meant that Cold War Era mutual respect for territorial spheres of influence on the borders of Great Powers no longer served as pillars of stable geopolitical coexistence. After the Soviet collapse in 1992 the U.S. has acted as if it were entitled and empowered to implement a Monroe Doctrine for the world. To make such a grandiose hegemonic political destiny credible the U.S. has willingly shouldered the immense economic and strategic burdens that accompany the role, paying the immense costs and uncertainties of maintaining hundreds of foreign military bases around the world and naval fleets in every ocean.

NATO’s insistence early in the Ukraine War on making Russia pay for its invasion by being again reduced to the normalcies of territorial sovereignty was undoubtedly intended to be a master class for the benefit of Russia, and especially China, in the geopolitics of the post-Cold War world. It also provided an occasion to send China, currently the more formidable adversary of the West, a message written with the blood of Ukrainian lives, that any show of force to regain control over Taiwan will be met an even more punitive response, including thinly veiled threats that pointedly refuse to rule out uses of nuclear weapons. Pentagon war games some months ago ominously showed that China would prevail in any military encounter in the South China Seas unless the U.S. was prepared to cross the nuclear threshold. This assessment should confirms the renewed strategic dependence on nuclear weaponry if the U.S. is to continue to insist on managing global security for the world. In the short run, the Taiwan challenge has proven helpful in making the case for even larger military appropriations from Congress.

American diplomacy toward China has aggravated an already inflammatory context by some inexplicably provocative behavior in recent months. First came a gratuitous public pronouncement by Biden last May while in Asia to provide whatever military assistance was deemed necessary to protect Taiwan if under attack by China. And secondly, came the provocative and destabilizing August visit to Taiwan by Nancy Pelosi at a time of already high tensions. Such provocations violated the spirit of the Shanghai Communique that was issued by China and the U.S. in 1972. This document the outcome of a diplomatic breakthrough a half century ago has kept a reasonably stable status quo between these major geopolitical adversaries based on what Henry Kissinger praised as ‘strategic ambiguity,’ what others have referred to as the One China Policy. These Biden/Pelosi ploys seem yet another expression of American amateurism when it comes to foreign policy during the Biden presidency, or worse, are deliberate efforts to provoke Xi Jinping to take action justifying an American punitive response. This supposedly nationally ambitious autocrat is already being accused in China of being weak, negatively portrayed in his own country as backing down on the key policy goal of achieving the reunification of China and Taiwan. Despite these provocations by Washington, China has yet to depart from its oft repeated commitment to achieve Chinese reunification by peaceful means.

Whether this crisis involving Taiwan reflect incompetence or malice is a matter of judgment. Either is unacceptably imprudent when it comes to nuclear dangers rising again to the surface, the very opposite of the responsible statecraft expected of a Great Power given the risks of the Nuclear Age.

In effect, remembering Hiroshima and Nagasaki in 2022 is overshadowed by this dual reality of ongoing ‘geopolitical wars.’ It is also a reminder that nuclear war was narrowly averted in the Cuban Missile Crisis of 1962 by what Martin Sherwin, an authoritative interpreter of nuclear risk called, ‘dumb luck.’ [Gambling with Armageddon (2020); Also relevant Daniel Ellsberg, The Doomsday Machine (2017)]. It may also be the moment when a nascent peace movement in the Global North wakes up and pushes for adoption of the TPNW approach as a critical political goal of the Global South.