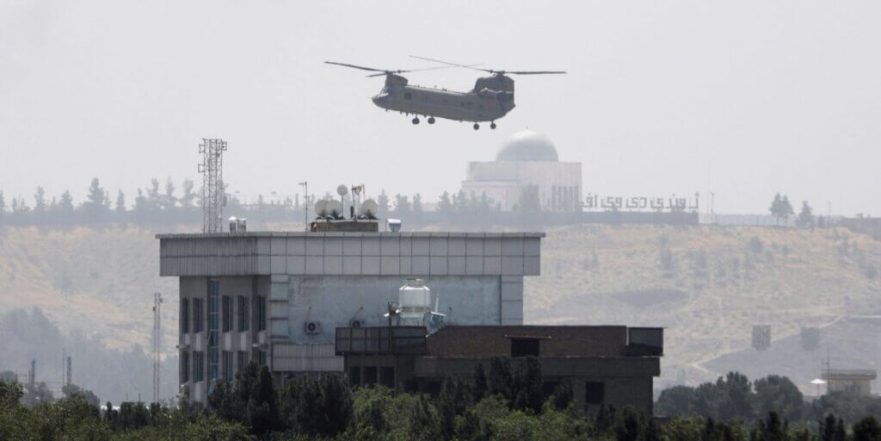 We are delighted to crosspost this piece from Global Justice in the 21st Century, the blog of JWE Board Member Richard Falk.

Exploding a suicide bomb on Afghan civilians fleeing for their lives at the Kabul International Airport on August 26, 2021 was a terrorist crime of the greatest magnitude and a gross expression of political sociopathology by the perpetrators, Islamic State-Khorosan or ISIS-k. Those responsible for such deliberative mayhem should be held accountable in accordance with law to the extent feasible.

Yet for President Biden to rely on virtually the same vengeful trope employed by George W. Bush after the 9/11 attacks represents a dehumanizing demoralizing descent into the domain of primitive vengeance. These are Biden’ words predictably highlighted by the media, uttered with contempt: “Know this: we will not forgive, we will not forget. We will hunt you down and make you pay.” And Biden made sure there would be no misunderstanding by adding the imperial reassurance of being law unto oneself: “We will respond with force and precision, at the place we choose and at the moment of our choosing.” Not a word about the relevance of law and justice, much less the kind of phrasing the U.S. Government would expect, and demand, if the target of such violence occurred within Russia or China—‘within the parameters of international law.’ At least, Biden didn’t follow Bush down the dark corridor of declaring a second ‘war on terror,’ limiting his pledge to the presumed attackers, in the spirit of what seems like an international variant of ‘vigilante justice,’ the first phase of which was a drone attack against ISIS-k personnel allegedly connected with the airport atrocity.

A parallel theme in Biden’s post-attack remarks glamorized the mission of the departing American military, which had the effect of covering up the inexplicably abrupt collapse of a prolonged state-building undertaking by the United States. True, the American soldiers who were killed or wounded were tragic victims of terrorism on the last days of service in Afghanistan, but to call professional soldiers carrying out chaotic evacuation orders ‘heroes’ is to divert attention from those who devised such a disastrous mission, which refers to the whole 20 years of expensive, bloody, destructive futility that leave the country in a shambles with bleak future prospects. Not a word of lamentation or acknowledgement of this colossal failure, which involved no meaningful course correction after the high-profile commitment was made two decades ago. From the counterterror operation that ended with the killing or dispersing of the al-Qaeda operative the American presence was enlarged without debate or authorization to one of regime change followed by state-building and ‘democracy promotion,’ but disguised as ‘reconstruction’ of the state post-Taliban defeat.

Yet Afghanistan is far from the first state-building collapse that the U.S. has sponsored for years before negotiating a humiliating exit that was sugar-coated to blur the strategic disaster, which also hid the responsibility of no less than four presidential administrations of putting young Americans in harm’s way for no justifiable purpose. Worse than the specific failure in Afghanistan is the systemic inability to acknowledge and at least make a long overdue effort to learn finally that military superiority is not enough to overcome determined national resistance. Having experienced costly failures in Vietnam, Libya, Iraq, elsewhere and yet refusing to grasp the non-viability of Western military intervention and imposed state-building blueprints in the post-colonial world is not only a major explanation of American imperial decline. It is also a guaranteed recipe for the continued adherence to a dangerously obsolete and nihilistic version of geopolitics, which lacks the agency of the colonial era to transform in a stable and self-serving manner what it conquers. Such post-colonial undertakings more destructively than ever carry out the work of demolition, leaving behind a lengthy trail of death and destruction when the intervenors finally decide to go home, pulling out its personnel, equipment, and some of its collaborating natives who made themselves politically vulnerable to the ‘rough justice’ of the nationalist movements they are seen to have betrayed. Of course, among those that are desperate to leave, are those many Afghans fearful of the future of their impoverished country for diverse reasons, including famine and deep poverty, economic refugees that deserve as much empathy as those who for opportunistic or ideological reasons sided with the American project.

The Domestic Roots of Geopolitical Obsession

H.L.Mencken, the American humorist of a century ago, perceptively observely that “Nobody ever went broke underestimating the intelligence of the American people.” It is a signature failure of democracy in the United States that the most respected media platforms continue to be dominated by the stale views of retired generals and admirals, high-level intelligence officials, and Beltway think tank servants of the political class in America, while the dissident voices of genuine critics are kept from the citizenry, consigned to the wilderness of obscure internet venues. Yes, there is a public level of civic illiteracy subsumed beneath the self-blinding cult of ‘American exceptionalism’ that seems incurably so addicted to national innocence and accompanying virtues as to be unable to interpret and act in accord with obvious precepts of national interest. Our leaders tell us constantly ‘we are better than this’ or Americans can do anything if united and determined while inculcating our worst tendencies.

President Biden presents himself as “a student of history” who declared that he knew of “no conflict where when a war was ending, one side was able to guarantee that everyone that wanted to be extracted from that country could get out.” Instead of ‘ending’ Biden should have said ‘lost,’ and referred to those Afghan allies trapped within as having made a losing gamble, and hence were desperate to be ‘extracted,’ a mechanistic formulation that crept its way into the president’s text. Had Biden chosen the more accurate word, ‘rescued,’ it might have signaled the start of the long journey on a rightful path of remorse, responsibility, and accountability. Unlike the intervening imperial forces, those among the Afghan people that were coopted, corrupted, or induced to collaborate, not only put their life in jeopardy but often endanger the wellbeing of their entire families.

The real story of why this state-building failure was hidden from view for so long, and why it was undertaken in the first place, has yet to be revealed to or understood by the American public. The United States, having been on a war footing ever since 1940 has effectively militarized the international dimensions of the American global state, impoverished the political and moral imagination of the political class shaping foreign policy, and put the American ship of state on a collision course with history, as well as sacrificing such vital national goals as domestic wellbeing and ecological sustainability. The outcome in Afghanistan more than other similar foreign policy failures, has exposed the underbelly of militarized capitalism—special interests, private sector paramilitary operations of for-profit organizations promote war-making for mercenaries, arms sales, well-funded NGOs engaged in a variety of humanitarian tasks helpful to ‘winning the hearts and minds’ of the resident population. Such a web of activities and goals underpin and sustain these ‘benevolent’ interventions enabling the delusional security paradigm based on ‘political realism’ to postpone as long as possible the whiplash of ‘political reality.’ Whoever cries ‘fire’ is sidelined as ‘leftist’ or ‘socialist,’ effectively silenced, while the two political parties squabble bitterly over who is to be blamed for ‘the last act,’ conservatives complaining about the lack of ‘strategic patience’ while mainstream liberals talk about the misfortune of a well-intentioned undertaking gone awry that had been made for the benefit of others and to promote more humane and stable national, regional, and global conditions.

Yet the post-conflict discourse of the political class is once again being shaped by those that insist on ‘looking forward,’ and certainly not lamenting what has collapsed, and why. This means above all refusing to analyze why trillions invested in training and equipping Afghan military and police forces, and creating a national governance structure, which could not and would not prevent the virtually bloodless takeover in a few weeks by the ragtag, poorly equipped Taliban. We should remember that when the Soviet were forced to withdraw by the American funded and CIA organized mujhadeen resistance, it took three years of fighting to dislodge the ‘puppet government’ they left behind in 1989. In contrast, as soon as the Americans signaled their acceptance of defeat, negotiating a nonviolent departure in February 2020 during the last year of Trump’s presidency in Doha, the Taliban “began gaining ground. It was a campaign of persistence, with the Taliban betting that the US would lose patience and leave, and they were right.” [NYTimes, Aug 27, 2021]

There was also many establishment expressions of dismay that the U.S. Government had relied on the Taliban to provide for airport security during the evacuation process, and skeptical dismissal of their pledges to govern differently the second time around, including a more inclusive approach to  the multi-ethnic makeup of country with respect to governance, along with their promise of better treatment of women and improved relations with the outside world. The United States has expediently trusted the Taliban at the airport and received positive reports from the American military commanders on the scene, but its political leaders and influential media platforms continue to express hostile and skeptical views of the Taliban expressions of their reformed political identity, refusing to let the Taliban escape from the terrorist box that has confined them over the past 20+ years. As with Hamas, it seems preferable from the Western viewpoint of its broader political agenda to refuse to accept, much less encourage, or even explore the genuineness of such a professed commitment of Taliban to a changed identity. The result as with Hamas is to create such pressure on the politically victorious group that indeed they are faced with the choice of surrender or terrorist forms of resistance.

If indeed Afghanistan is abruptly denied foreign economic assistance formerly supplied by the intervening coalition, then it will erase the US/NATO failure, and few tears will be shed in Washington as it notes the humanitarian catastrophe that ensues in the country. In this sense, Vietnam was fortunate in that it had China as an adversary, which meant that their nationalist victory could be somewhat acknowledged and subsequent economic development permitted. If the Biden presidency was not preoccupied by its covering over the humiliating record of geopolitical failure in Afghanistan and had some real empathy for the Afghan people it would give every benefit of doubt and encouragement to the Taliban at this stage, including massive economic relief, hoping for the best, and at least trying to make it happen.

There are deeper questions raised by the latest phase of the Afghan nightmare that haunt the future of the United States: