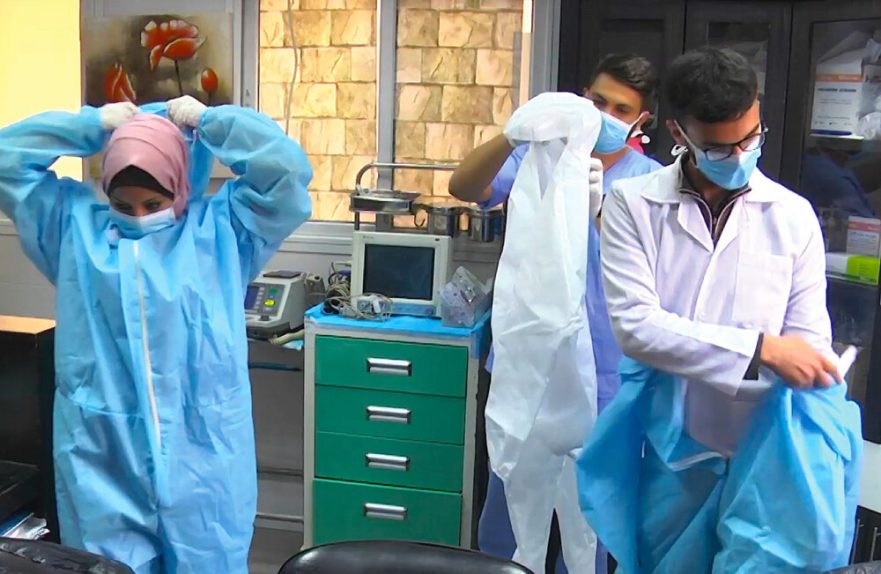 April 18 Gaza
Gaza Strip recorded 23 new deaths within 24 hours, bringing its death toll to 761. The pandemic is pushing Gaza’s health system to its limits. About 33,000 residents had received a vaccination. About half of those have been fully vaccinated, or just 0.8 per cent of the population.
The United Arab Emirates has donated tens of thousands of doses of the Russian vaccine Sputnik V. Last month, the World Health Organization and its partners running the United Nations COVAX program delivered 61,400 vaccines to the Palestinian Authority, whereas 21,300 were shipped to the Gaza Strip. Also last month, Palestinian health authorities received 100,000 doses of the Sinopharm vaccine donated by China.
Israel has resisted international calls for it to vaccinate Palestinians in Gaza and the West Bank. It has agreed to vaccinate 100,000 Palestinians from the West Bank with permits to work in Israel or in West Bank settlements. It has also provided 2,000 doses to the Palestinian Authority in the West Bank.
Haaretz

April 19 Israel
Israel has purchased nine million additional doses of the Pfizer coronavirus vaccine that will arrive in 2022, Prime Minister Benjamin Netanyahu and Health Minister Yuli Edelstein announced. The additional doses are meant to ensure that Israel will be able to provide booster shots in order to extend protection from the coronavirus through 2022.
Haaretz

April 20 Occupied territories & Israel
The Palestinian Authority has ordered a total of 4.5 million doses of the Pfizer/BioNTech and Sputnik V coronavirus vaccines. It was not clear when the shipments would begin arriving. The total cost was 27 million dollars.
Israel, meanwhile, has given doses to more than 100,000 Palestinians who have work permits there.
Haaretz

April 20 Israel
A look at Israel’s success combating widespread vaccine skepticism – especially among ultra-Orthodox Jewish communities. Now more than 80% of ultra-Orthodox Israelis above the age of 30 are vaccinated or have recovered from the virus.
NPR

April 21 West Bank
Medical Aid for Palestinians (MAP) partners with the Palestinian Medical Relief Society (PMRS) to provide a mobile clinic for marginalized Palestinian communities in the southern West Bank. Poor living conditions have exacerbated the impact of the COVID-19 pandemic on the health and wellbeing of residents. Dr. Sahar Al Sulibe, one of the clinic doctors, explained, “Poverty and unemployment rates have increased, leading to the increase of gender-based violence, mental distress and malnutrition. …We have also encountered an increase of the number of anemic children.”
Medical Aid for Palestinians

April 21 Israel
Israel’s Health Ministry will begin using electronic bracelets next month to enforce quarantine restrictions on all arrivals from abroad – tourists as well as local residents. The bracelets will replace the government-mandated hotels used to house and monitor many travelers.
Haaretz

April 21 United States
The Invest in Justice coalition published End Medical Apartheid from the US to Palestine: a call to action.
The coalition aims to create and pass U.S. policies in Congress to end U.S. military funding to Israel and advance the transformative Freedom Is the Future demands, while bolstering movements to end U.S. investment in militarism and reinvest in community needs. Israel’s refusal to vaccinate Palestinians is but the latest, cruel and inhuman chapter of its decades-long practice of colonialism, ethnic cleansing, military occupation and, apartheid against the Palestinian people. “It’s time to take a stand to end all military funding to an apartheid regime overseas and to demand the end of apartheid right here. …COVID-19 did not invent systematic injustice, but it has exposed and sharpened injustices already there.”
Mondoweiss

April 21 United Kingdom
Over a dozen rights groups have accused Oxford University of using politicized numbers and “celebrating” a military occupation because its website tracking coronavirus vaccine delivery, Our World in Data, does not include Palestinians in its figures on Israel’s vaccine rollout. Citing the Fourth Geneva Convention, 19 NGOs including Amnesty International, Physicians for Human Rights Israel and a coalition of Palestinian human rights groups said that all 4.5 million Palestinians living under Israel’s military occupation should be included in the calculation of the percentage of Israel’s population that has been vaccinated.
Independent

April 22 Gaza
The sick and dying are rapidly pushing Gaza’s hospitals close to capacity amid a surge in COVID-19 cases. Palestinians fear a combination of poverty, medical shortages, vaccine skepticism, poor COVID-19 data and mass gatherings during Ramadan could accelerate the increase.
Around 70% of intensive care unit beds were occupied, up from 37% at the end of March. There were 86 deaths over the past six days, an increase of 43% over the week before. Only symptomatic people are being tested and the positivity rate reached 43%. Health officials say the factors that led to the A majority of Gazans – 54.2% – said they would not take the vaccine.
Just 34,287 people have been vaccinated, even though the enclave has received 109,600 doses since February donated by Russia, the United Arab Emirates and the global COVAX.
Graveyards are also feeling the strain. In Gaza City, gravedigger Mohammad al-Haresh told Reuters he had been burying up to 10 COVID-19 victims per day, up from one or two a month ago. “Wartime was difficult, but the coronavirus has been much harder for us,” said Haresh, who dug graves throughout the 2014 Israel-Gaza war. “In war, we would dig graves or bury the dead during a truce or ceasefire. With the coronavirus, there is no truce.”
Reuters

• New COVID-19 infections in the Gaza Strip continue to decline slowly, but deaths are at record highs, and with a drop in testing – uncertainty prevails
• In the West Bank, cases also continue to subside, but hospitals remain near full capacity with over 90% of ICU beds occupied
• COVAX delivers another 72,000 AstraZeneca vaccines to the oPt: 43,200 doses go to the Nablus cold store in West Bank, while 28,800 go to Gaza Strip.
WHO

April 22 Israel
Israel’s Health Ministry released a travel advisory warning Israelis, including those who have recovered from or been vaccinated against COVID-19, to refrain from traveling to Ukraine, Ethiopia, Brazil, South Africa, India, Mexico and Turkey because of high COVID morbidity rates. The statement also noted the presence of alarming COVID in those countries, and recommended that the public avoid all travel outside of Israel if possible.
Haaretz

April 22 United Kingdom
With the ongoing devastating effects of the coronavirus pandemic and the impending hope for a better future in sight, it is more crucial than ever for scientists and policy makers to accurately track and follow vaccination coverage. Our World in Data, a website associated with the University of Oxford and scientifically edited by researchers of the Oxford Martin Programme on Global Development at the university, has emerged as a leading tool for tracking vaccination delivery and to understand the protective effects of vaccination, its side effects, and people’s attitudes towards vaccination. In its mission, the website commits to focusing on “poverty, disease, hunger, climate change, war, existential risks, and inequality”, in order to contribute to solving the world’s largest problems by using existing data and making it widely available.
Yet, one of its charts uses politicized and misleading figures, celebrating one of the oldest regimes of military occupation and perpetuating its impunity before international law.
Al Haq

April 23 Gaza
In March, active coronavirus cases in the Gaza Strip more than tripled. During that month, Gaza’s health authorities confirmed the first cases of the more transmissible B117 variant first discovered in the UK, which has caused major surges in many countries. There is now a severe shortage of oxygen and oxygen generating plants. While certain hospitals have small oxygen production plants, they do not have the capacity to produce the oxygen supplies that coronavirus patients need when cases are high. “There’s a deficit of about 50 to 60 percent for oxygen-generating plants,” said Khalid Abu Jayyab, head of maintenance at the Palestine-Turkey Friendship Hospital in Gaza City. “We are suffering a severe shortage during the pandemic,” he added. “The Israeli occupation and siege bears full responsibility.”
Electronic Intifada

This current wave coincides with the Ramadan holiday, which began on April 13. The Muslim holy month is traditionally celebrated with evening family gatherings, crowded shopping sprees, and prayers in mosques. While health officials called for nighttime closures, the International Committee of the Red Cross spoke to Palestinians who related their fears, anxieties, and pressure to keep stores open despite the health risks.
“Four out of five families are in precarious job situations with no sustainable income, the unemployment rate was at record rates of over 50%, with youth unemployment reaching almost 70%,” said the ICRC this week. “People need to be able to provide for themselves and their families and keep businesses open.”
Mondoweiss

April 23 Israel
Israel has recorded no new daily Covid-19 deaths for the first time in 10 months, as the country pushes ahead with its speedy vaccination drive. The health ministry said more than 53% of the country’s population of about nine million people had received two doses of vaccine.
BBC News

For the first time in nearly 10 months, Israel recorded no COVID deaths. The Health Ministry warned Israelis, including those who have recovered from the virus or been vaccinated, to refrain from traveling to Turkey, India, Brazil and four other countries because of high COVID morbidity rates.
Haaretz