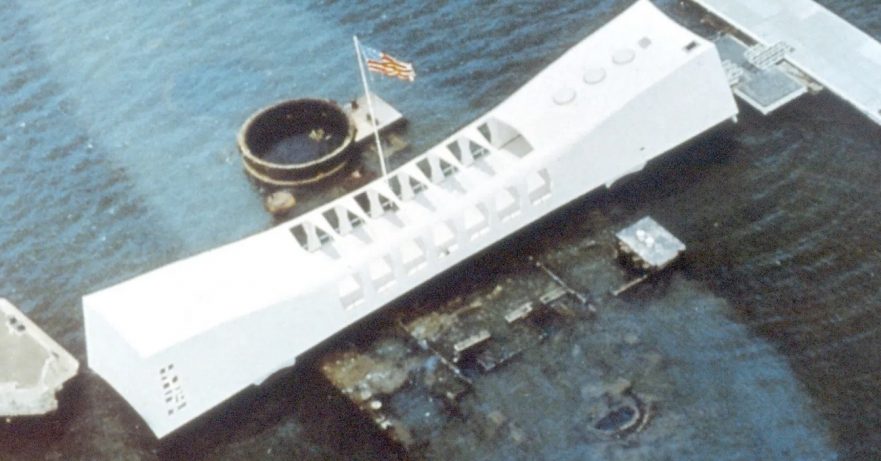 We’re happy to cross-post here the first portion of this important post that our friend David Swanson first put onto his blog a few days ago, and which is republished here with his permission.

One of the holiest days of the year is fast approaching. Are you ready? Remember the true meaning of Pearl Harbor Day!

The U.S. government planned, prepared for, and provoked a war with Japan for years, and was in many ways at war already, waiting for Japan to fire the first shot, when Japan attacked the Philippines and Pearl Harbor. What gets lost in the questions of exactly who knew what when in the days before those attacks, and what combination of incompetence and cynicism allowed them to happen, is the fact that major steps had indisputably been taken toward war but none had been taken toward peace.

The Asia pivot of the Obama-Trump era had a precedent in the years leading up to WWII, as the United States and Japan built up their military presence in the Pacific. The United States was aiding China in the war against Japan and blockading Japan to deprive it of critical resources prior to Japan’s attack on U.S. troops and imperial territories. The militarism of the United States does not free Japan of responsibility for its own militarism, or vice versa, but the myth of the innocent bystander shockingly assaulted out of the blue is no more real than the myth of the war to save the Jews.

When I ask people to justify WWII, they always say “Hitler,” but if the European war was so easily justifiable, why shouldn’t the United States have joined it earlier? Why was the U.S. public so overwhelmingly against U.S. entry into the war until after December 7, 1941? Why does a war with Germany that supposedly should have been entered have to be depicted as a defensive battle through the convoluted logic that Japan fired the first shot, thereby (somehow) making the crusade to end the Holocaust in Europe a question of self-defense? Germany declared war on the United States, hoping that Japan would assist Germany in the struggle against the Soviet Union. But Germany did not attack the United States.

Winston Churchill wanted the United States to enter WWII, just as he had wanted the United States to enter WWI. The Lusitania was attacked by Germany without warning, during WWI, we’re told in U.S. text books, despite Germany literally having published warnings in New York newspapers and newspapers around the United States. These warnings were printed right next to ads for sailing on the Lusitania and were signed by the German embassy.[i] Newspapers wrote articles about the warnings. The Cunard company was asked about the warnings. The former captain of the Lusitania had already quit — reportedly due to the stress of sailing through what Germany had publicly declared a war zone. Meanwhile Winston Churchill wrote to the President of Britain’s Board of Trade, “It is most important to attract neutral shipping to our shores in the hope especially of embroiling the United States with Germany.”[ii] It was under his command that the usual British military protection was not provided to the Lusitania, despite Cunard having stated that it was counting on that protection. That the Lusitania was carrying weapons and troops to aid the British in the war against Germany was asserted by Germany and by other observers, and was true. Sinking the Lusitania was a horrible act of mass-murder, but it wasn’t a surprise assault by evil against pure goodness.

In September of 1932, Colonel Jack Jouett, a veteran U.S. pilot, began teaching 80 cadets at a new military flying school in China.[iii] Already, war was in the air. On January 17, 1934, Eleanor Roosevelt made a speech: “Any one who thinks, must think of the next war as suicide. How deadly stupid we are that we can study history and live through what we live through, and complacently allow the same causes to put us through the same thing again.”[iv] When President Franklin Roosevelt visited Pearl Harbor on July 28, 1934, General Kunishiga Tanaka wrote in the Japan Advertiser, objecting to the build-up of the American fleet and the creation of additional bases in Alaska and the Aleutian Islands: “Such insolent behavior makes us most suspicious. It makes us think a major disturbance is purposely being encouraged in the Pacific. This is greatly regretted.”[v]

In October 1934, George Seldes wrote in Harper’s Magazine: “It is an axiom that nations do not arm for war but for a war.” Seldes asked an official at the Navy League:

In 1935 Smedley Butler, two years after foiling a coup against Roosevelt, and four years after being court martialed for recounting an incident in which Benito Mussolini ran over a girl with his car[vii], published to enormous success a short book called War Is a Racket.[viii] He wrote:

At each session of Congress the question of further naval appropriations comes up. The swivel-chair admirals don’t shout that ‘We need lots of battleships to war on this nation or that nation.’ Oh, no. First of all, they let it be known that America is menaced by a great naval power. Almost any day, these admirals will tell you, the great fleet of this supposed enemy will strike suddenly and annihilate our 125,000,000 people. Just like that. Then they begin to cry for a larger navy. For what? To fight the enemy? Oh my, no. Oh, no. For defense purposes only. Then, incidentally, they announce maneuvers in the Pacific. For defense. Uh, huh.

The Pacific is a great big ocean. We have a tremendous coastline in the Pacific. Will the maneuvers be off the coast, two or three hundred miles? Oh, no. The maneuvers will be two thousand, yes, perhaps even thirty-five hundred miles, off the coast. The Japanese, a proud people, of course will be pleased beyond expression to see the United States fleet so close to Nippon’s shores. Even as pleased as would be the residents of California were they to dimly discern, through the morning mist, the Japanese fleet playing at war games off Los Angeles.”

In March 1935, Roosevelt bestowed Wake Island on the U.S. Navy and gave Pan Am Airways a permit to build runways on Wake Island, Midway Island, and Guam. Japanese military commanders announced that they were disturbed and viewed these runways as a threat. So did peace activists in the United States. By the next month, Roosevelt had planned war games and maneuvers near the Aleutian Islands and Midway Island. By the following month, peace activists were marching in New York advocating friendship with Japan. Norman Thomas wrote in 1935: “The Man from Mars who saw how men suffered in the last war and how frantically they are preparing for the next war, which they know will be worse, would come to the conclusion that he was looking at the denizens of a lunatic asylum.”

On May 18, 1935, ten thousand marched up Fifth Avenue in New York with posters and signs opposing the build-up to war with Japan. Similar scenes were repeated numerous times in this period.[ix] People made the case for peace, while the government armed for war, built bases for war, rehearsed for war in the Pacific, and practiced blackouts and sheltering from air raids to prepare people for war. The U.S. Navy developed its plans for a war on Japan. The March 8, 1939, version of these plans described “an offensive war of long duration” that would destroy the military and disrupt the economic life of Japan.

The U.S. military even planned for a Japanese attack on Hawaii, which it thought might begin with conquering the island of Ni’ihau, from which flights would take off to assault the other islands. U.S. Army Air Corp. Lt. Col. Gerald Brant approached the Robinson family, which owned Ni’ihau and still does. He asked them to plow furrows across the island in a grid, to render it useless for airplanes. Between 1933 and 1937, three Ni’ihau men cut the furrows with plows pulled by mules or draft horses. As it turned out, the Japanese had no plans to use Ni’ihau, but when a Japanese plane that had just been part of the attack on Pearl Harbor had to make an emergency landing, it landed on Ni’ihau despite all the efforts of the mules and horses.

On July 21, 1936, all the newspapers in Tokyo had the same headline: the U.S. government was loaning China 100 million yuan with which to buy U.S. weapons.[x] On August 5, 1937, the Japanese government announced that it was disturbed that 182 U.S. airmen, each accompanied by two mechanics, would be flying airplanes in China.[xi]

You can find the rest of David Swanson’s carefully researched blog-post here. The excerpt above takes you down to the sub-head “1940”.