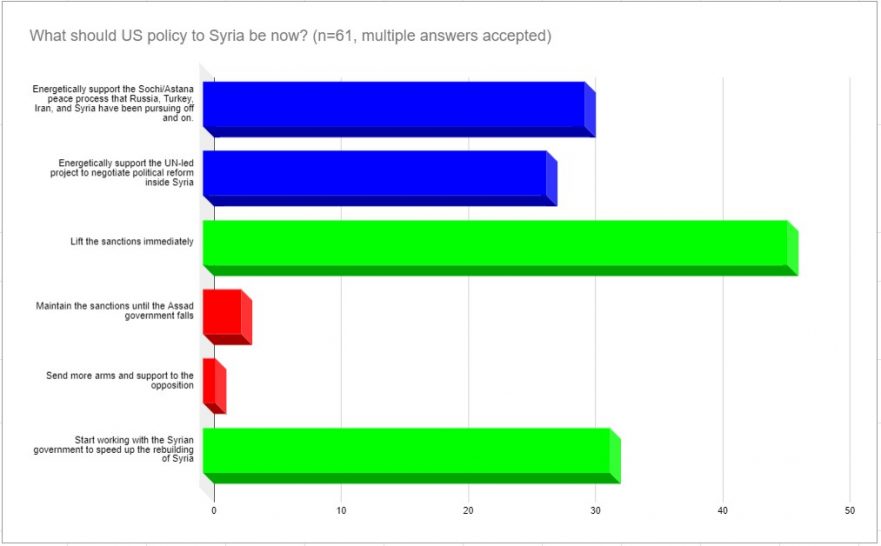 Just World Educational’s Commonsense on Syria project continues to spark fascinating discussions and engaged responses from a growing group of attendees and participants. Three more sessions have followed the two opening webinars of the series, and we have now reached the halfway point. Five more sessions are scheduled for the one-month project, and each takes a unique look at a different area of interest relating to Syria, its history, the armed conflict and international intervention.

If you have not yet registered for the series, you only need to register once to attend all upcoming sessions. Click this link to join the Zoom webinars: https://zoom.us/webinar/register/WN_WZV_6U1KTjaJSXk71AyWEA

You can also explore the videos of past sessions and some resources collected by Just World Educational for additional background at this link: bit.ly/Syria-resources

During each webinar, attendees are invited to submit questions for consideration by using the chat function at the bottom of the page. The discussions are lively and intriguing, as JWE President Helena Cobban discusses a wide range of issues with each guest and allows for interchange between multiple panelists. Attendees are invited to participate in polls during each session, and after the webinars, they are asked to complete a survey with an evaluation of the program.

Interest in the programs has been striking, especially amid the COVID-19 pandemic. More people have used the special shortened link to access this campaign’s information than any previous informational campaign initiated by Just World Educational.

While the attendees of these sessions have varying knowledge related to Syria – as noted in their poll responses – they include a range of people with vast experience in the Palestinian rights movement, peace activism, and international relations; and they all have probing questions and diverse takeaways from each of the sessions they attend. Dr. Alice Rothchild, JWE Board Member, presents an assortment of questions from the chat for each speaker to engage with following the primary discussion.

The third session, “U.S. policy on Syria” on April 1, featured Mona Yacoubian, Senior Advisor to the Vice President for Middle East & Africa at the U.S. Institute of Peace. Her work centers on conflict analysis and prevention in the Middle East, with a specific focus on Syria, Iraq, and Lebanon. Prior to joining USIP, Yacoubian served as deputy assistant administrator in the Middle East Bureau at USAID. She engaged in a lively conversation with JWE President Helena Cobban, especially over issues of U.S. intervention in Syria and the region and the doctrine of the “responsibility to protect.”

When polled about U.S. policy on Syria, participants expressed (a sshown above) support for a range of policies, most of which are at sharp variance with both the Obama and Trump administrations’ approach. Of the 61 people who participated in this poll, 46 identified immediate lifting of the sanctions as a priority, while only three said that sanctions should remain until the Assad government falls. Thirty energetically supported the Sochi/Astana peace process involving Russia, Turkey, Iran and Syria while 32 supported greater positive engagement with the Syrian government to rebuild Syria following the devastation of the war.

The fourth session on April 4, “Western media’s role in Syria, including on chemical weapons,” featured Max Blumenthal, journalist and author, in conversation with Helena Cobban. Author of The Management of Savagery and founder of The Grayzone, Blumenthal cast a sharp gaze on Western reporting, including their coverage of the White Helmets and Syrian armed opposition groups – including Al-Qaeda-linked organizations – and the failure to discuss revelations made by whistleblowers at the Organisation for the Prohibition of Chemical Weapons.

On April 8, Dr. Sami Moubayed, a Syrian historian and writer and the author of nine books about Syria’s modern history, spoke about the history and present of Israel’s role in Syria. He discussed the ongoing occupation of the Golan Heights and the people of the Golan, as well as Israel’s military and political actions toward Syria, especially in recent years. When polled before the session, participants expressed, on balance, a distinct lack of knowledge about the ongoing Israeli occupation of Syrian territory in Golan and the Syrian citizens who live there – along with a desire for more information.

Comments after the sessions highlighted attendees’ response to the events:

“Thank you for such an informative, well organized webinar.”

“Excellent resources that I can share with my university students.”

“Incredibly informative and educational.  So much information and history to research during this time in our lives.”

“It is wonderful to have erudite and very human scholars like Sami Moubayed to learn from. We also are seeing close-up the ongoing disastrous effects of colonialism in this region.”

“Thanks so much for providing this excellent series at a time when we need to be  informed on the Syrian crisis and plight of Syrian people.”

“Thank you for pulling such great resources and experts together.”

“These will be so very beneficial to students in Middle East Studies courses.”

Each session received an average score of 4.0 or better from attendees asked to rate the educational and informational value of the webinar on a scale of 1 through 5.. Session 5 received the most supportive response, with participants rating it a 4.7 on this scale. In all cases, attendees noted that they were overwhelmingly inclined to recommend the series, with an average rating on this metric of over 4.4.

The Commonsense on Syria series continues on Saturday, April 11 with the sixth session, “Syria in its region.” The webinar will feature Elijah Magnier and Sharmine Narwani, journalists and analysts with decades of experience in the region. On Wednesday, April 14, the seventh session will resume the series. The discussion on Syrian refugees and internally displaced persons (IDPs) will feature Dr. Omar Dahi, an associate professor of economics at Hampshire College.

Registration for this and all other sessions is available at this link: https://zoom.us/webinar/register/WN_WZV_6U1KTjaJSXk71AyWEA

Read more about the series at this JWE blog post, and learn more at our resource page: https://bit.ly/Syria-resources

We hope you will continue to join us as we expand this conversation even further, shattering myths and seriously contending with often-marginalized perspectives on Syria.