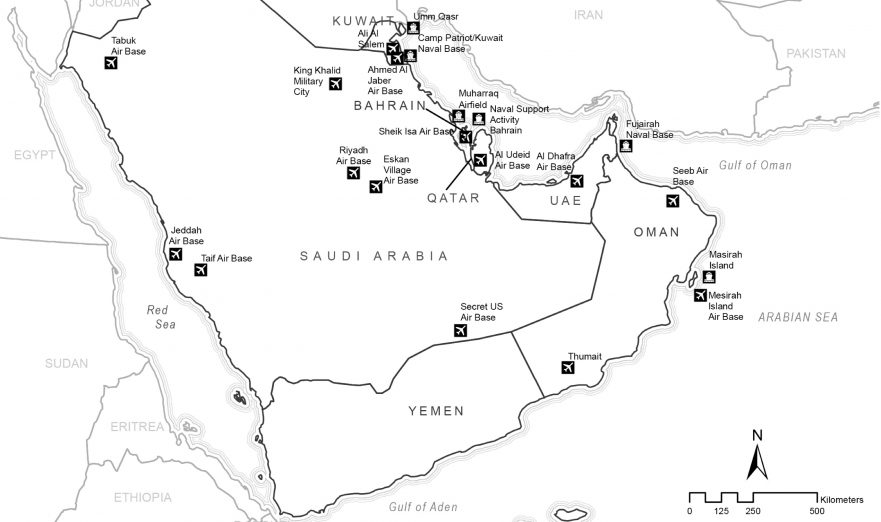 Washington DC, May 18– Any U.S. military attack against Iran could very well trigger Iranian retaliation using such means as bombings and cyber attacks, and if these in turn should trigger a US invasion of Iran, that “would make either Vietnam or Iraq or Afghanistan look like nothing much at all.”

That was the somber warning voiced May 17 by Amb. Chas W. Freeman, Jr., a retired senior American diplomat and former Assistant Secretary of Defense who is an expert in the affairs of the Arabian Peninsula, China, and global strategic matters in general.

Amb. Freeman was speaking to JWE president Helena Cobban in the latest episode of Just World Podcasts. That episode was a complement to a column on the regional and global consequences of any U.S. attack on Iran that Ms. Cobban published on May 15.

In the podcast interview, Amb. Freeman assessed the deeply destabilizing effects on world politics both of the step that Pres. Donald J. Trump took in May last year to pull the United States out of the Iran deal (the “JCPOA”) concluded by Pres. Barack Obama in 2015, and of the more recent steps the US administration has taken to tighten the screws on Iran and its trading partners and to escalate the military tensions with Iran.

Surveying the impact of Trump’s decision to pull out of the JCPOA, Amb. Freeman noted that not only had the deal been negotiated among and signed by three European countries, Russia, and China, in addition to the United States and Iran, but it was then also specifically endorsed by the UN Security Council.

“The United States now finds itself in an odd position of sanctioning anyone who complies with the Security Council’s resolution for which the United States itself voted,” he noted. “This is a frontal assault on international law and it is deeply resented.”

He continued: “The Europeans understand very well that they need a relationship with Iran. They also, would like to see the sanctity of contract preserved in the new world disorder we have entered. They don’t appreciate the habit of the Trump administration of undoing deals… So, I think this is a crisis in US-European relations.”

He said he thought the Russians had only a limited capacity to do anything to undermine the latest rounds of sanctions that Pres. Trump had announced against parties engaging in trade with Iran. But, “They could act in common with China, to do so. And here we are at a moment that is most uncertain and difficult to predict, because the Trump administration is going all-out to try to trip up China’s progress in development and to pin it to the earth, if you will.”

After surveying the many ways in which Pres. Trump’s trade policies have been attacking China and the depth of China’s centuries-old relationship with Iran, he concluded, “So I think the Chinese… may be on the verge of actually doing something to undercut the dollar dominance that has been the norm in global affairs for the past 70 years.”

He picked up on a point Ms. Cobban had made in her column, when she noted that, when British Prime Minister Anthony Eden had launched a military regime-change operation in Egypt in 1956 that President Dwight Eisenhower deeply disagreed with, Eisenhower used Washington’s financial clout to force the British and their allies to end their aggression against Egypt.

“Financial things do matter,” Amb. Freeman said, “and the Chinese already have in place rather feeble substitute for SWIFT, the clearing house in Belgium through which dollar transactions are conducted. They could get together with the Russians and the special vehicle that the Europeans have created to sustain trade with Iran and seriously undercut American influence and power internationally.

“We don’t know whether that will happen or not. They’re not involved militarily in the Middle East, and would be deeply opposed to any US invasion of Iran. They don’t have the capacity to do anything military themselves. But they do have a financial and economic capability that is not to be dismissed as irrelevant.”

He also drew attention to the domestic-American implications of the administration’s latest apparent rush toward escalation or war against Iran.

” There is [already] a constitutional crisis in the United States over executive usurpation of congressional authority, often with the de-facto collusion of spineless members of Congress, ” he said. “The Constitution is a radical document only in one respect: the Founding Fathers entrusted the authorization for wars of choice to the legislature. This is the first time in history this had been done! Article One, section eight, clause 11 reserves the right to authorize wars of choice exclusively to the Congress.”

Over the past few decades, however, he said that Congress had increasingly delegated or defaulted on its authority to authorize wars. But now, “there are some people in the United States, for example, one presidential candidate, Tulsi Gabbard, who has very forcefully condemned the possibility that the president could on his own bat launch a war against Iran.

“Constitutionally, he doesn’t have the authority to do that. I would add that, politically, he does not have the support of the American people for that.”

He allowed that possibly, with a sufficiently contrived incident, Pres. Trump might be able to obtain public support for a war, for a while. “But we’re talking about a long term conflict here, not an instantly resolvable, quick, victorious war. And so, I think the constitutional issues are terribly important. They need to be addressed!”

Amb. Freeman underscored the need for any decision to go war to be the subject of due deliberation by the U.S. Congress, “rather than decisions by tweet.”

He also decried what he described as “the great fallacy of the theories of maximum pressure that we’re now seeing at work with Iran, with Venezuela, with North Korea, with Cuba, maybe a little bit with Russia, now with China,” which he defined as “the assumption that somehow or other coercion automatically leads to surrender.”

“I know of no instance where it ever has,” he stressed. “If you want to end a conflict, you have to reach a negotiated outcome that both sides can live with even if they consider it less desirable than it might be. So, I think we’re talking [regarding Iran] about starting a war with no clear objectives, no war termination strategy, and with an enemy that will not feel bound by the rules that we insist others follow, even if we don’t.”

The whole of this timely, 30-minute interview with Amb. Freeman can be listened to or downloaded here. At that web-page can also be found– for those who prefer to take in their information by reading rather than listening– a complete transcript of the interview.

Those interested in reading Amb. Freeman’s 2016 book on U.S. policies in the Middle East can find more information about it here. Information about his 2013 book on China is here.

This podcast episode is the last in a 13-episode series that Ms. Cobban has made, which cover many issues of vital concern in the Middle east and in U.S. policies toward the region. More information about the podcast series and the linked series of text columns can be found here.