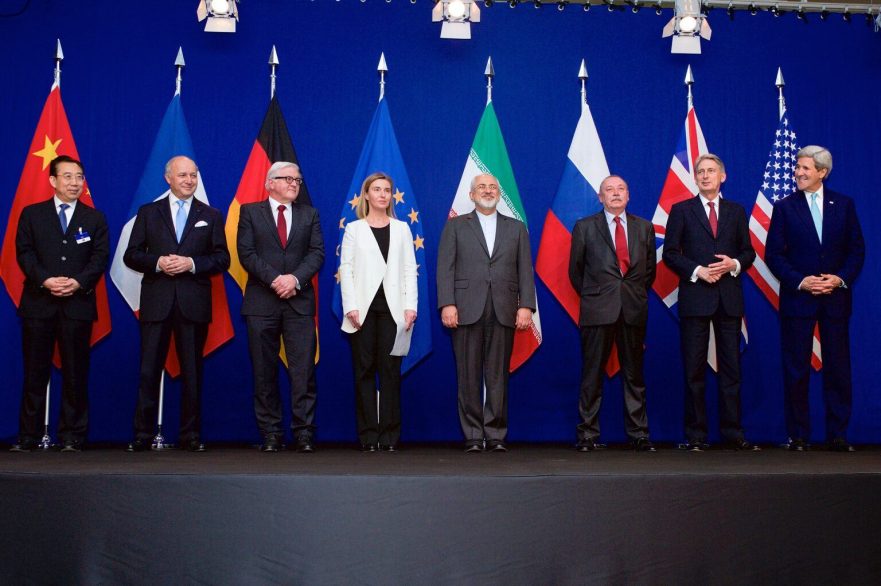 We are pleased to crosspost this piece by JWE Board Member and International Jurist Richard Falk, which was first published by COUNTERPUNCH

The Road Not Taken

After two weeks in Iran during latter part of January 1979, the height of the revolutionary movement against the dynastic, autocratic rule of Mohammed Reza Ayatollah, I had the opportunity for an extended conversation with Ayatollah Ruhollah Khomeini in his tent where he received foreign visitors and journalists during his final days in Paris. This was the individual who would serve as uncontested Iranian leader, officially the Supreme Guide, of the Islamic Republic of Iran until his death in 1989.

I was accompanied at the meeting by Ramsey Clark, former U.S. Attorney General and major progressive personality at the time in the United States and Don Luce, a prominent and courageous anti-war religiously oriented activist who gained worldwide fame in 1970 by departing from a prescribed tour route to expose a visiting delegation of U.S. Congress members to the notorious ‘tiger cages’ in Con Son Prison the major facility in South Vietnam a repeated focus of severe torture allegations. During our time together in Iran we met many religious leaders and secular supporters of the popular uprising that would soon be running the country. We witnessed extraordinary displays of mass popular excitement in the country and anxious sighs of disbelief that greeted the news that the Shah had abdicated the Peacock Throne, and as it turned out, leaving Iran never to return.

There are many aspects of this meeting that are worth recalling but one stands out for me as having current relevance more than 43 years later. Immediately after greetings were exchanged, Ayatollah Khomeini carefully posed a question to us that seemed uppermost in his mind, more so than any of the topics covered in the ensuing two hours or so of questions and answers, with the three of us raising most of the questions. But the Ayatollah’s question came first, and it turned out to be the one where our words of response earned the full attention of this religious leader: “Do we think that the U.S. Government will repeat its intervention of 1953 that overthrew a popularly elected government and restored the Shah to his throne?”

We each responded along these lines: “Of course, we could not know for sure how Washington will act, but we believed the U.S. had learned some lessons from the past, including the awkwardness of supporting coups that brought to power repressive leaders while professing to lead ‘the free world’ against Communism and Soviet expansionism. We also stressed the recent failure of intervention in Vietnam and the apparent strength and unity of the movement that overthrew the Shah, as well as our impressions of the Iranian military as beset by divided loyalties.” We also called to the attention of the Ayatollah, on the basis of our meeting a few days earlier in Tehran with the American Ambassador in Iran, William Sullivan, who told us that he had forwarded repeated assessments to the White House, and a supposedly liberal president, Jimmy Carter, that the movement against the Shah’s government enjoyed the overwhelming support of the Iranian people and that even the leadership of the Iranian armed force was resigned to the acceptance of the political outcome. On this basis, Sullivan recommended an immediate U.S. Government effort to reassure the leaders of the Iranian revolutionary movement that it sought normal and positive relations with whatever government emerged in Iran during the ensuing weeks.

Ayatollah Khomeini was a formidable presence, pondered our comments, and slowly responded in almost these exact words, “If what you are telling us is accurate, and comes to pass, then we have no objection to the Shah coming to the U.S. or elsewhere for medical treatment, and we can have normal relations with your country.” Of course, this road was not the path taken by either country, which has resulted in enormous adverse consequences for Iran and the Middle East as a whole, with distorting effects that have been playing out over the intervening decades, which are shamelessly generating skepticism and propaganda about the U.S. rejoining the JCPOA, thus setting the stage for another phase of dangerous outcomes whether the Iran Nuclear Agreement is restored or not in 2022.

There were some worrisome signs back in 1979 that made such an exploratory attempt to accept this dramatic internal display of the human rights of all peoples to self-determination unlikely to materialize without generating geopolitical friction. The U.S. National Security Advisor at the time, Zbigniew Brzezinski, strongly favored a commitment to once again restore the Shah to his throne, and had a strong influence on President Jimmy Carter’s thinking, which was given priority over Sullivan’s strong advice based on his direct knowledge of the realities in Iran.

In Iran there were some strong words being uttered by militants about the revolutionary intentions of Iran extending to the whole of the Islamic world, and especially the Gulf monarchies, which sent strategic chills down the backs of Western foreign policy elites extremely sensitive to strategi threats to Gulf oil reserves. And then there was Israel aware of the pro-Palestinian, anti-Zionist leadership emerging in Tehran, which set off an alarm in reaction to some anti-Zionist rhetoric of the more militant leaders of the Islamic Republic. In any event, normalization between the two countries was not to be, however much sense it made then and now with respect to peace, security, and self-determination back then and now.

Lines from a much quoted poem by Robert Frost are worth reflecting upon given this exchange of views more than 43 years ago.

Two roads diverged in a wood, and I-

I took the one less traveled by,

And that has made all the difference.

Recontextualizing Nonproliferation for Some, Nuclearism for Others

It needs to be emphasized that Trump unilaterally withdrew from the 2015 JCPOA and reimposed punitive sanctions on Iran that inflicted many hardships on the civilian population despite the fact that Iran was in full compliance with the terms of the agreement up through 2018 as confirmed by IAEA periodic inspections. It appears that Trump was induced by his ardent Zionist son-in-law, Jared Kushner, and Israeli supporters to denounce the agreement a bad deal from a security perspective as the justification for U.S. withdrawal.

In the drawn-out Vienna negotiations on restoring the agreement the U.S. has been under pressure from Israel and the Gulf monarchies to extract concessions from Iran bearing on matters outside the scope of the nuclear agreement. It would seem more plausible to be confronted by demands from Iran for reparations for the harm experienced by the bad faith behavior of the U.S., which sets a terrible precedent for the reliability of non-treaty international commitments. The fact that Iran has been prepared to go along with such a one-sided negotiating format undoubtedly reflects a motivation to gain relief from sanctions, and may also reflect the sincerity of Iran’s declared intention never to acquire nuclear weapons. Building trust in international relations presupposes mutual good faith adherence to carefully negotiated arrangements. At the very least, Biden should have humbly apologized to Iran for the disruptive 2018 withdrawal, and despite his legal inability to bind future presidents, he might have regained some higher ground by pledging to respect the agreements for as long as he remains president.

It is worth comparing the extravagant language of the recent Biden-Lapid Joint Jerusalem Declaration of Strategic Partnership in which Biden is not only affirmed a long-term U.S. commitment, audaciously proclaiming it as ‘bipartisan’ even ‘sacrosanct’:

It has been completely ignored by the Western media that Iran has made a huge concession when it entered the Obama promoted Nuclear Agreement in 2015 (JCPOA) without an insistence that Israel destroy its arsenal of nuclear weapons. As the agreement was negotiated, at least in public, there were no assurances required of Israel, not even something as intangible as requiring Israel to issue a No First Use Declaration. It was to be expected that Israel and the United States would remain silent about solidifying Western control of the region, and especially retaining sole possession of the ultimate weapon of destructive violence. Yet Israel, in particular, seems empowered enough to insist on receiving firm assurances that the U.S. would prevent Iran from ever acquiring nuclear weapons by all means necessary (again without drawing into question Israel’s retention of such weapons without any disclosure of its intentions with respect to threat or use). The language of commitment in the Jerusalem Declaration puts the U.S. in the position of agreeing to a use of force without any hint of or apparent need for a legal authorization:

The United States stresses that integral to this pledge is the commitment never to allow Iran to acquire a nuclear weapon, and that it is prepared to use all elements of its national power to ensure that outcome.” (emphasis in original)

Even this was apparently not enough for Israeli security hawks who wanted the pledge to pertain to any perceived steps toward acquisition.

Such an explicit bilateral strategic commitment as contained in the Jerusalem Declaration seems to overlook Iran’s completely valid legal and political option, if it wishes to rely upon it, to withdraw from the NPT, which it is entitled to do under Article X(1) of the treaty:

1. Each Party shall in exercising its national sovereignty have the right to withdraw from the Treaty if it decides that extraordinary events, related to the subject matter of this Treaty, have jeopardized the supreme interests of its country. It shall give notice of such withdrawal to all other parties to the Treaty and to the United Nations Security Council three months in advance. Such notice shall include a statement of the extraordinary events it regards as having jeopardized its supreme interests.

Given Israel’s threats, its nuclear capabilities, its strategic partnership with the U.S., withdrawal would seem an entirely reasonable course of action for Iran to take. If deterrence can serve as a security justification under the NPT, it would seem few states in the world could make a stronger case.

There is a further consideration. If the United States were taking the ethos of nonproliferation seriously it would be concentrating on denuclearizing the Middle East as a region rather than acting to preserve Israel nuclear hegemony. The obvious way to achieve such a result would be to support the negotiation of a Middle East Nuclear Free Zone together with a non-aggression security framework. All states except for Israel have supported such an initiative, including Iran and Saudi Arabia. It would be a breakthrough for peace and security, besides freeing billions for more constructive uses.

A start in this direction has been made in the Treaty of Prohibition of Nuclear Weapons (TPNW) negotiated under UN auspices and coming into force in 2021. But to gain political traction sufficient to provide a post-nuclear security framework it needs the support of the current nine nuclear weapons states. None have so far become Parties to TPNW, and the three NATO nuclear weapons states, the U.S., France, and the UK, along with Russia have issued statements their principled opposition and unconditional rejection of a disarmament approach, despite its promise of total nonproliferation.

If we are destined to live with nuclear weapons, we may have to endure the nuclear hegemony of the P-5, but to use the NPT ethos to justify discriminatory treatment of a non-nuclear state such as Iran seem to a regressive geopolitical undertaking. For this reason alone people of good will should hope for the unconditional renewal of the JCPOA. It is time for the morally attuned public to awake to the reality that a nuclear Israel has neither a security nor a political justification for the continued bullying of Iran. To complain about Iran’s political solidarity with some movements in the region pales in its gravity if compared fairly with the U.S. and Israel’s discretionary bombing, political assassinations, interventions, and violations of the basic sovereign rights of countries in the region.