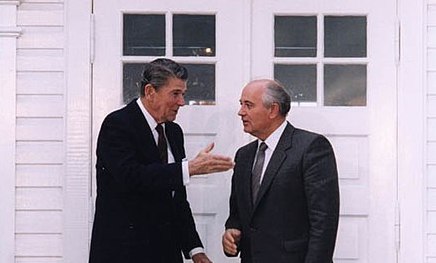 We are pleased to crosspost an excerpt of this piece from JWE Board Member and International Jurist Richard Falk’s blog, Global Justice in the 21st Century.

I think it is safe to say that Mikhail Gorbachev had the greatest historical impact of any public figure since the end of World War II. To be sure, it is a bitterly polarized legacy. One of unbounded admiration and historical achievement in the West and one of contempt and almost total disrepute in Russia, holding Gorbachev responsible for the breakup of the Soviet Union as a Great Power and its loss of political relevance beyond its territorial borders. It has taken Vladimir Putin, a political figure reviled in the West, to undue Russian irrelevance by launching an aggressive war against Ukraine, but whether the cost is worth it even for Russia, only time will tell.

I did have the opportunity on two occasions to interact personally with Gorbachev in a rather extended manner that included time for social engagement. I felt it a great honor to do so as he was already a brave and sympathetic historic personage of great distinction, and although misleadingly lauded in the West partly because he paved the way for unipolarity and triumphalism, and possibly even Putin and Putinism, outcomes that he was neither responsible for nor wished to have happen. In an important sense Gorbachev’s international legacy of humane global governance is already all but forgotten by the mainstream. The West admired most his decisive role in loosening the Soviet grip on East Europe and unwittingly accelerating the process by which the Soviet internal empire of ‘captive’ nations was permanently shattered.. My two encounters with Gorbachev were after he ceased to be a leader, and devoted himself to sharing idea and activities with likeminded individuals.

My first encounter was a day-long meeting in 1993 or 1994 at a men’s club in New York City of a contemplated foundation that he was to be co-Chair with James Baker, George H.W. Bush’s influential Secretary of State to support work toward a peaceful world undertaken by politically independent persons of the once antagonistic so-called ‘superpowers.’ To my astonishment, which has not lessened over the years, I was invited to serve as a member of the initial Board of Directors along with several more mainstream individuals. For undisclosed reasons, Baker was unable to attend the meeting, but Gorbachev, by way of an interpreter participated throughout the long day, including at a small luncheon. The meeting was devoted to what the Foundation might most usefully do, how it would operate, including its plans to establish a funding base. Gorbachev mainly listened, asked useful questions, and projected a demeanor of being one among equals. As it happened, nothing further took place, and the whole undertaking was discreetly abandoned. Nevertheless, it did give me a glimpse of this great man adjusting to his new role and status. Looking back, it was a time when Gorbachev continued to identify with the transnational ruling elites of Western countries but showed an intellectual interest in working with more independent individuals in global civil society. Above all, it demonstrated to me that as a private citizen Gorbachev was committed to a peaceful and human sequel to the tensions and antagonisms of the Cold War decades.

The second encounter was a couple of years later in Italy at a meeting on the future of Euurope under the auspices of Gorbachev’s own foundation, bearing his name. The 25 or so invited participants were mainly European intellectuals and government officials. It went on for two days, revisiting Gorbachev’s ideas of a common European home and collective security structure. The debate was lively and stimulating although the pan-European consensus never got much further than the walls of the conference center. I had the feeling that Gorbachev now felt himself an independent voice of civil society, widely honored in the West yet ignored in his own country. He had returned to living in Moscow, and reported that Putin had respectfully received him and made him feel at ease about resuming Russian residence despite his continuing unpopularity in the country of his birth and later political prominence.

In my own work, I have been conscious of course of Gorbachev’s role as a transformative agent of change that made ‘the impossible’ happen in the Soviet context, although not altogether responsive to his agency, much that happened is best understood beneath the rubric of ‘unintended consequences.’ Given my interest in ‘the politics of impossibility’ I often mentioned Mandela in South Africa and Gorbachev in the Soviet Union as having validated this counter-intuitive belief that seems the most realistic hinge of hope given the present world situation, strange as that may sound.

It is always of great interest to meet with historic figures of global stature. In Gorbachev I found none of the moral radiance and existential charisma that I associated with my meeting with Nelson Mandela. Rather in Gorbachev I found a sense of purpose, of decency, of intelligence, and a seriousness about doing what he could to make his country, region, and world better than they were at present.

I would suppose that Putin does not regret the passing of the Communist Era, but will fault Gorbachev on nationalist, Czarist grounds as allowing the territorial extensions of the Soviet Union to shrink, leading to the temporary eclipse of Russian greatness. With minor variations the Russian media will follow this line, reporting on the demonization that Gorbachev deservedly experienced, especially in the decade after the Soviet collapse.

It may take several more political earthquakes for Russia and Russians to arrive at a balanced assessment of Gorbachev. But in fact, the West has not done much better, showering him with honors and awards, while keeping their near exclusive focus on his roles in ending the Cold War with the West and in taking on the Communist Party elite of bureaucrats (nomenklatura) that had presided since the early days of the Soviet Union following Lenin’s death. The fact that this precipitated the Soviet collapse was an outcome that almost no one in the West lamented.

Gorbachev’s memory will last, most celebrated outside of Russia, and subject to subtle reappraisals from within, in relation to Europe, and with regard to world peace. I would feel more comfortable contemplating the future of humanity if Gorbachev was running the global show than any other political leader currently walking about on planet Earth!

Richard Falk’s full remarks can be found at Global Justice in the 21st Century.