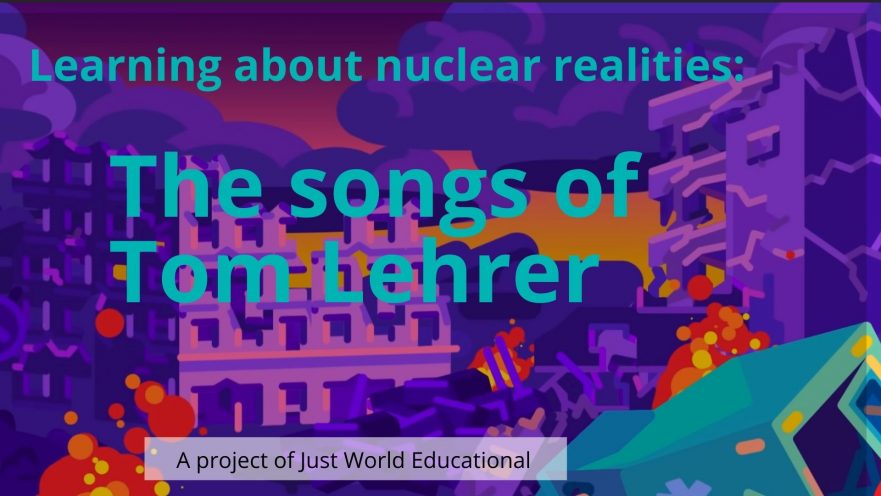 Tom Lehrer is a (sadly long-retired) singer-songwriter, and as it happens former math professor, whose self-produced records of wackily satirical songs struck a strong chord among supporters of the anti-nuclear movement of the Cold War era. Maybe it’s time to revive them today. They can not only help inform people about nuclear realities and nuclear risk but also, perhaps, help us all to deal with the stress of thinking about nuclear annihilation. Gallows humor, if you please.

So here, for a new generation, is a guide to Tom Lehrer’s five greatest nuclear hits:

This one contains many of Lehrer’s super-clever rhymes from the very first lines. It doesn’t inform the listener of very much beyond the stark, looming fact of the possibility of nuclear omnicide. But it’s very catchy.

This one packs a more subtle (and informative) punch. Lehrer prefaces the song with a small jab at bellophilia and a nod to the fact that World War II will be omnicidal– “If any songs are going to come out of World War III, we’d we’d better start writing them now.” The song is a folksy ballad about a pilot who goes off to drop the bomb. It ends with two very timely reminders: that when the pilot returns to his home it “may be/ A pile of debris” and also that the entire war might be over, “An hour and a half from now!”

This is a little ditty about nuclear proliferation, that Lehrer recorded in 1967. At the outset, it gently skewers U.S. exceptionalism but it implies that a “balance of power” with a nuclear-armed Russia is okay.

He then goes on to give an account of further acts of “horizontal” (that is, country-to-country) proliferation that is significantly inaccurate. He makes no mention of NATO member Britain getting and demonstrating its first nuclear weapon in 1952. He mentions Indonesia, South Africa, Egypt, and India all wanting to get the bomb but does not specify that of these countries only (Apartheid-era) South Africa and Israeli actually built bombs for themselves– and while the South African Apartheid regime dismantled its nuclear weapons in the lead-up to democratization, the Israeli Apartheid regime continued to build its arsenal (after having, in 1969, tested one weapon in the South Atlantic in cooperation with the South Africans.)

The song ends with these (not wholly serious) predictions: “Luxembourg is next to go/ And (who knows?) maybe Monaco./ We’ll try to stay serene and calm/ When Alabama gets the bomb.”

By the way, back in the late 1980s, when I was working on nuclear-proliferation issues, I surmised that one of Israel’s main objectives in developing and (discreetly) demonstrating its nuclear-weapons capability was so it could use “nuclear blackmail” against the United States in order to extort continuing shipments of large amounts of “conventional” (i.e., non-nuclear) weaponry out of Washington. As in, “Hey, if you don’t give us all those tanks and planes we’re asking for we may have to catapult the world into a nuclear confrontation sometime soon.”

This song is a little (satirical!) paean to Wernher von Braun, the master of Nazi-era rocketry who after the defeat of Nazi Germany was brought to the United States to develop the long-distance rocketry (“missile”) systems which formed two legs– land-launched and submarine-launched– of the “strategic triad” used to deliver our nuclear warheads to countries on the other side of the world. (The third leg of the triad was/is long-distance bomber aircraft.)

The song contains a nice small nod to the dangers of proliferation at the end. Though I suspect the Chinese did not need any Nazi-era rocketry expertise in order to develop their nuclear delivery systems…

Lehrer wrote this song in the mid-1960s, an era in which U.S. officials were proposing to create a “Multi-Lateral Force” of submarines armed with Polaris nuclear missiles that would be jointly run with NATO allies France and Germany. Read more about this proposal here. Spoiler alert: it didn’t go anywhere.

This song contains the notable lines: “Once all the Germans were warlike and mean,/ But that couldn’t happen again / We taught them a lesson in nineteen eighteen,/ And they’ve hardly bothered us since then.”

Wariness of German power was still a big thing in the United States in the 1960s. More recently, many Americans have been delighted to see Germany vow to greatly increase its military spending in response to the Ukraine crisis.

From 1962 through 1972, Tom Lehrer taught math at MIT, where doubtless he came into contact with many of the professors and researchers there who were working on nuclear-weapons design and use projects. (Much of their work depended heavily on advanced math.) He had started his singing/songwriting career in the early 1950s. In the 1970s, he stopped writing news songs and performing, concentrating instead on teaching both math and the history of musical theater. Born in 1928, he is still alive, living in I believe Santa Cruz, CA.