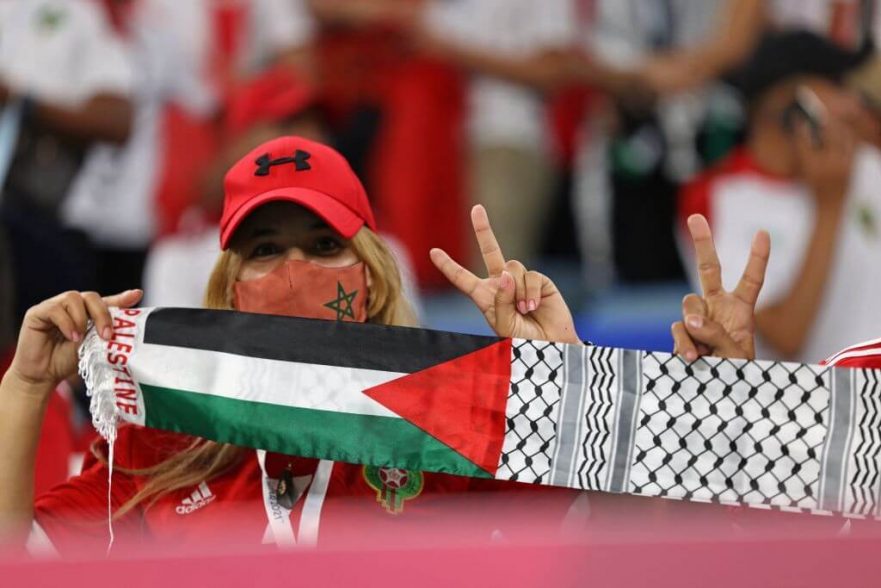 Palestinian football history is rich and goes back to British Mandate Palestine when the Palestinian national team played against Australia’s football team in Sydney on July 2, 1939. Interestingly, at the time, nine years before the creation of Israel, the entire Palestinian team comprised of Jewish players and Australia won 7-5. Today, Palestinian sports unions and clubs are scattered across major Palestinian cities such as Jaffa, Gaza, Jerusalem, and Haifa.

Despite suffering a serious blow in 1948 due to the establishment of Israel and the takeover of many Palestine’s sports facilities by the Israeli authorities, Palestinian sports remained alive over the years with sports taking a particular political taste. Sports has never been separated from politics especially after Israel’s occupation of Palestine.

The scenes of football fans waving the Palestinian flag in stadiums at local, regional, and international tournaments have become familiar across the globe. To the disappointment of people who call for separating sports from politics, this does not seem possible. Supporters of various teams have turned stadiums into platforms to voice their support for the Palestinian people and their struggle for freedom and statehood. In some cases, they have received punishments and restrictions from sports bodies such as UEFA for doing so.

In response to imposing a fine penalty on the Green Brigade, one of the team’s ultras groups raised money to pay the fine imposed by UEFA and an additional 176,000 British pounds to support Palestinian charities. The Scottish Celtic fans in Scotland have repeatedly expressed their support for the Palestinian cause by raising Palestinian flags especially when their team is playing against an Israeli one. Celtic fans are also known for their pro-Palestine chants.

In fact, Israel also knows that sports can’t be separated from politics. Israel’s former prime minister Benjamin Netanyahu published a video calling on the Iranian people to revolt against their own government, when Iranians took to the streets in 2018. He asked them, “Can you imagine how hard it is to stop Ronaldo from scoring a goal? I used to play soccer, let me tell you, it is almost impossible, but the Iranian team just did the impossible. To the Iranian team I say, you showed courage on the playing field, and today, you are sharing the same courage in the streets of Iran.”

Palestinian players and sports people have always been a target for Israel. In 2009, Israeli forces arrested Palestinian footballer Mahmoud al-Sarsak, while he was on his way to the West Bank from the Gaza Strip. They held him under the “Unlawful Combatants Law,” which allows Israel to hold prisoners without charge or trial. After three years under arrest, al-Sarsak gained his freedom after going on a three-month-long hunger strike.

Palestinian sports infrastructure and players have also been targeted by Israel. In 2009, Israel bombed Al Ahli Sports Club in a refugee camp, Al-Nusierat, and during the Great March of Return (GMR), on April 4, 2018, Israeli snipers shot Palestinian footballer Mohammed Khalil in the knee, ending his career. In fact, dozens of Palestinians who were rendered amputees by Israeli forces during the GMR protests formed an amputee football team.

During the Tokyo 2020 Olympic Games, a number of Arab players chose to withdraw from competing rather than compete against Israeli players. Algerian judoka Fethi Nourine was sent home and had a 10-year ban imposed on him as punishment for his withdrawal, which effectively ended his career.

Sudan’s Mohamed Abdalrasool did the same when he had to compete against Tohar Butbul – whom Nourine had refused to play with – citing solidarity with the Palestinian people. The stance of these athletes reveals the huge gap between the political and popular levels in the Arab world, and it further explains the importance of sports and the impossibility of separating it from politics.

More recently, at the 2021 FIFA Arab Cup held in Doha between November 30 and December 18, increasing solidarity with the Palestinian people was expressed by football fans. During the Tunisia-Egypt game, Palestinian flags were visible. The Algerian football team and its fans were very vocal in support of Palestinians, raising the Palestinian flag during their matches.

Arab popular solidarity with the Palestinians is not strange, as chants in support of the Palestinians have become the norm in stadiums. The fans of Moroccan team Raja have gone viral with a song they dedicated to Palestine, which says: “Beloved Palestine, you are the most beautiful of countries, May God protect you… Alrajais [the fans of Raja] are the voice of oppressed people… Freedom to Palestine and happiness shall prevail in Jerusalem.” Most recently, the Egyptian team Al Ahly raised a Palestinian flag after winning the CAF Super Cup in a match played against Raja in Doha.

These chants of solidarity show that sports can’t be separated from politics, and that losing a game by withdrawing for political reasons is as powerful as any victory. These acts of solidarity with the Palestinian people, from Scotland to Algeria, and Morocco to Qatar, prove once again that sports is a powerful tool for change.