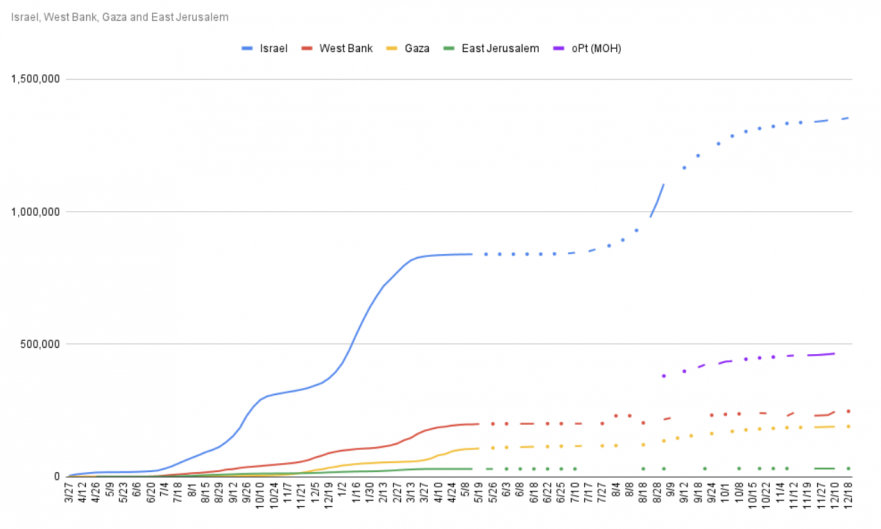 We’re pleased to repost this weekly report by JWE board member Alice Rothchild, MD, which was earlier posted by the Jewish Voice for Peace Health Advisory Council (JVP-HAC)

Please note that Coronavirus cases are an underestimate given the lack of testing, resources, and asymptomatic carriers and up-to-date numbers from the oPt are often confusing.  We recognize that in resource poor areas just as Gaza and the West Bank, these numbers are a major underrepresentation and fail to reflect the impact of the pandemic. Numbers on East Jerusalem are unchanged and thus subject to suspicion and may be also within the West Bank or Israel data.

December 12 Israel
So far in Israel, 55 Omicron cases have been confirmed, and about 50 more are suspected.
According to data presented on 12/11 by Sheba Medical Center, Tel Hashomer, three rounds of inoculation reduce the risk of Omicron infection, but not to the same levels they did for the Delta variant. Preliminary data indicates that people who were vaccinated six months ago or earlier are apparently not protected from Omicron at all.
Since Israel approved giving COVID vaccines to 5 -to 11-year-olds, about 110,000 children in that age group have received a shot, out of a total population of 1.2 million children. From 12/12 onward, inoculations are being given out in schools as well. On 12/11, Prime Minister Bennett announced new restrictions to limit the spread of the virus. He wants the number of vaccinated people to increase 10-fold each day, and he wants to use sanctions to encourage people to get their booster shots. An initiative to prevent unvaccinated people from leaving the country is not expected to move forward, and Bennett’s idea to enforce a lockdown on such people was quashed by the deputy attorney general.
Haaretz

Israel restricted travel to England, Denmark, and 49 other nations as Omicron spread, with the travel ban going into effect in 72 hours. After that, would-be visitors need the permission of the exceptions committee to enter Israel. So far 67 cases of the Omicron variant were detected in Israel, with another 80 suspected cases awaiting test results.
Haaretz

December 13 Israel
Support for vaccinating children against COVID among Israeli parents aged 25-44 lags significantly behind the rest of the population, despite members of this age group being among the most likely to have small children. According to a recent poll by the Israel Democracy Institute, only 47% of 25-34-year-olds and 46% of 35-44-year-olds believe that children aged 5-11 should receive the Pfizer vaccine, significantly less than the 56% support for inoculation among the general population.
Haaretz

December 14 Israel
In Israel 744 new coronavirus cases were diagnosed on 12/13, with 90 patients in serious condition including 65 on respirators. Despite a CDC decision in October to begin administering a fourth booster shot to high-risk individuals, the Health Ministry’s vaccination committee recommended against rolling out a fourth booster shot. Instead, Israel’s home front strategy will prioritize vaccinating the 42% of Israelis who are not fully protected.
Israel has added the United Arab Emirates and several European states to its list of “red’ countries, where high rates of COVID Omicron infection have been identified, the Health Ministry announced.  People who are vaccinated or have recovered from COVID entering Israel from red countries will enter a week of home quarantine, and will be released subject to a negative PCR test at the end of the week.
Unvaccinated people will be required to stay in a quarantine hotel until an initial negative COVID test, and only then will they be able to quarantine from home. Also, Prime Minister Naftali Bennett and Health Minister Nitzan Horowitz announced Israel will not ask shopping malls to mark vaccinated people with bracelets. This comes a day after announcing the plan, which has since been widely criticized, including by mall owners.
Haaretz
Haaretz

Anti-vaccine activists have launched a campaign of harassment against an Israeli rabbi, one of the ultra-Orthodox world’s most revered spiritual leaders, with some threatening to murder him and rape his great-grandchildren over his public support for vaccinating children against the coronavirus. Chaim Kanievsky, age 93 and widely regarded as one of the most influential figures within the so-called Lithuanian branch of non-Hasidic ultra-Orthodox – recently endorsed the government’s rollout of vaccines for children aged five -11, stating that getting inoculated was mandatory under Torah law.
Haaretz

Despite a strong start to its national inoculation campaign, which saw Israel hailed globally as a COVID success story, the country has fallen behind when it comes to childhood vaccination, and many previously vaccinated adults are now unprotected against the virus after declining to receive booster shots. A significantly lower proportion of children under the age of 12 have been vaccinated in Israel than in other countries which have rolled out pediatric vaccines, with the country lagging behind the United States, Canada, and China.
Haaretz

Israeli health care officials worry that holdouts are waiting to see how serious the next COVID wave becomes, as one million people decline to get the booster shot. They are not anti-vaxxers or COVID deniers, actually quite the opposite: they have already received the first two doses of the coronavirus vaccine, or were infected and recovered, but seem to feel they are adequately protected.
Haaretz

December 15 Israel
As of 12/14, there were 89 confirmed cases of the coronavirus variant in Israel. Out of those, 21 individuals were unvaccinated. Officials are also examining another 150 potential Omicron cases. New restrictions will allow people to enter without Green Passes only if they are seeking essential services. The list of what constitutes an essential service is currently being formulated by health officials and the attorney general. The Health Ministry will also provide a temporary Green Pass to children and adults who have only received a single dose of the vaccine, lasting for 30 days from the first dose.
Haaretz

December 16 Israel
An inter-ministerial team approved the entry of tourist groups that fall into the category of “Jewish tourism” early this week, exempting them from entry restrictions imposed to prevent the spread of the Omicron variant of the coronavirus. Upon the discovery of Omicron, the government has restored the ban on foreign citizens entering Israel, but Birthright delegations and similar organizations were exempted from the ban and are being allowed into Israel. Other groups, including Christians wishing to visit Israel for Christmas, have had their requests denied.
Haaretz
Haaretz
Haaretz

Despite American ultra-Orthodox leaders harshly condemning a “devastating” new vaccine mandate targeting non-public educational institutions in New York City, one of Israel’s most prominent Hasidic leaders has instructed his followers in Brooklyn to comply with government instructions. Rabbi Yissachar Dov Rokeach, the leader of the Belz Hasidic sect who lives in Israel, urged teachers at a new Belz school being built in Borough Park to get vaccinated, stating that “it is proper for all staff members to be vaccinated — the men as well as the women,” local news site BoroPark24 reported.
Haaretz

More than 40% of Israelis are not fully vaccinated, providing them with a lower level of protection against the Omicron variant of COVID-19. This puts a significant portion of the population at risk of contracting the virus, Prof. Ran Balicer, the head of an expert panel advising the Health Ministry, told Army Radio: “It has been shown in the U.K. that the level of protection of two doses against the Omicron strain is very low.”
Haaretz

Mondoweiss reviews their 19 months of COVID coverage, and announces that they will suspend their special pandemic coverage for the next few months.
Mondoweiss

Three Omicron infections have been detected in the occupied West Bank – the first cases of the new variant to have been recorded in oPt. The three infected Palestinian citizens, from the West Bank cities of Ramallah, Hebron, and Toubas, had recently returned from abroad, health ministry spokesperson Dr. Kamal al-Shakhra told press. “The three cases underwent the necessary tests in Palestinian laboratories and were found to be infected with the Omicron variant,” Al-Shakhra said. “Our preventive medicine teams are currently scanning those who had contact with the patients to conduct necessary tests.”
Alaraby

December 17 Israel
In this opinion piece, Amos Harel argues that Israel bought time against Omicron, but is now shooting itself in the foot. Bennett is frustrated by the public’s relative indifference to the early steps taken against Omicron, and the main effort against the new variant is being sabotaged by the Education Ministry.
Haaretz

December 18 Occupied territories
According to the Reuters coronavirus tracker, 48 coronavirus infections per 100,000 people (or 13% of the peak) were reported in the last week in the occupied Palestinian territories. The territories reported 322 new infections on average each day; 466,162 infections and 4,862 deaths have been reported since the onset of the pandemic. So far at least 3,184,868 doses of vaccine have been administered in the territories, or the equivalent of 34% of the population covered with two doses. During the last week reported, an average of about 11,122 doses were given each day; at that rate, it will take an additional 85 days to reach another 10% of the population.
Reuters

Five people died of coronavirus in Palestine in the last 24 hours as 165 new cases were recorded, today said Minister of Health Mai Alkaila.
She said in her daily report on the pandemic in Palestine that four deaths were recorded in the West Bank where 110 new cases were confirmed and 226 patients recovered.
The Gaza Strip had one death, 55 new cases, and 120 recoveries.
Alkaila said 104 people infected with coronavirus are getting treatment in hospitals and 55 are in intensive care while 11 are on ventilators.
WAFA

Graphics on the pandemic.
Worldometer

December 18 Israel
An Israeli hospital is set to launch a clinical trial to test the effectiveness of a fourth coronavirus vaccine shot in the coming days, as restrictions are being reimposed due to the highly contagious Omicron variant. The trial at Sheba Medical Center, Tel Hashomer, will be led by Prof. Gili Regev-Yochay, director of the Infectious Disease Epidemiology Unit, and will involve several phases. The research subjects will be 150 members of the hospital’s medical staff from whom serological testing data was collected over the past year, since vaccinations began in Israel.
Haaretz

Thanks to Trude Bennett