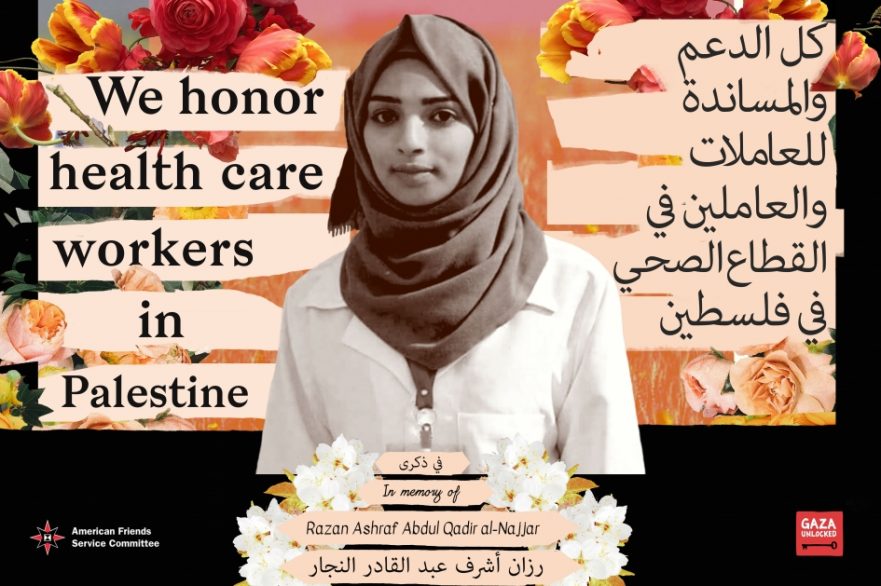 Just World Educational invites you to join the “virtual photo booth for solidarity” campaign launched by the American Friends Service Committee (AFSC) to honor Palestinian health care workers on June 1. This campaign marks the second anniversary of the killing of Razan al-Najjar, 20, a medic in Gaza treating wounded protesters as part of the Great March of Return. As she and other medics approached the fence imposed by Israel around the Gaza Strip, she and other first responders were fired on with live ammunition by Israeli occupation forces. Their white vests and raised hands did not dissuade the military attack.

Since that time, Razan al-Najjar has remained a symbol of the courage of Palestinian health care workers confronting the health crises imposed by occupation and siege. Amid the global COVID-19 pandemic, the sacrifices of Razan and other health care workers in Palestine have been highlighted, especially as the potential spread of the novel coronavirus in areas like besieged Gaza or inside Israeli prisons could create yet another layer of humanitarian disaster imposed upon Palestinians.

On June 1, we will all honor Razan al-Najjar and her fellow Palestinian health workers with a series of online actions. AFSC has created a lovely, downloadable sign for this campaign and calls on all of us to download and print it, take a selfie holding it, and then post that photo on social media. (You could color in the image as JWE President Helena Cobban did… leave it black and white… or make your own sign!)

Palestinian health workers have faced a series of attacks and fundamental denials of rights imposed by the Israeli occupation. Not only do we see the targeting of medics like Razan al-Najjar – along with hundreds of civilians killed and thousands upon thousands wounded – by Israeli occupation soldiers exercising vast military might against Palestinians in Gaza marching in the Great March of Return, but Palestinian health workers and health institutions face ongoing, chronic attacks that are met with impunity. Medical Aid for Palestinians documented these attacks in its report, Chronic Impunity: Gaza’s Health Sector Under Repeated Attack.

Back in 2018, Helena Cobban noted that Al-Najjar’s killing “may now help tip the scales of international opinion and international action yet further toward the goal of enforcing accountability on Israel for its chronically criminal behavior inside Palestine.” In 2019, a Commission of Inquiry with its mandate from the United Nations found reasonable grounds to conclude that Israeli military snipers intentionally targeted health workers and other vulnerable people, including children and people with disabilities, as well as journalists. But as Cobban had noted in her 2018 comments, “the U.S. government has been the main obstacle in the path of all efforts aimed at ending Israel’s numerous rights violations, ending its occupation of the West Bank, Gaza, and Golan, and restoring the too-long-denied rights of the Palestinians.”

Indeed, as Israeli impunity continues, the U.S. government officially smiles upon yet more rights violations, the most recent being the threatened annexation of the Jordan Valley and illegal settlements in the occupied West Bank.

Today, as health care workers in Palestine struggle to live, survive and help their fellow Palestinians to emerge from the COVID-19 pandemic, they face further attempts to smear their name by Israeli government and military institutions. Israeli officials attempted to smear Razan al-Najjar herself, building upon years of attempts to justify the bombing and invasion of Palestinian health care facilities by Israeli forces.

Israel has also continued to starve Palestinian health institutions and NGOs of the funds they need to provide much-needed care and services, with its Ministry of Strategic Affairs attempting to label the provision of health care services as a “threat to security,” demanding that European institutions and other external donors cut off their lifeline.

This June 1 and every day, we stand with Palestinian health care workers. We recall the words of Sabreen al-Najjar, speaking about her daughter’s indomitable spirit and will to live in justice and freedom, even as her dreams and her life were cut short by colonialism, occupation and siege.

“[Razan] aspired to be a doctor. But my husband’s unemployment and our poor economic conditions, resulting from the Israeli blockade, deprived her of the opportunity to pursue this dream after high school. Yet, she did not give up; instead, she studied nursing and took several intensive courses, in which she excelled. She reached out to the sick and injured everywhere, providing them with pro bono healthcare services….Armed with unusual tenacity and an emboldened spirit, Razan was fearless and energetic until her last breath. Indifferent to the barrage of bullets fired by Israeli soldiers at point-blank range, she moved courageously from one place to another to rescue the injured.”

Razan’s dedication and the extreme price she paid for her commitment can and must inspire us to take a stand. As Cobban noted in 2018 and remains true today: “A lot more organizing and political action will be needed before Washington changes its policies, thereby clearing the way to finally ending Israel’s gross, long-engrained rights violations and holding its leaders accountable.”

This June 1, join us to confront Israeli impunity and salute the health care heroes that continue to reflect the poetic phrase of Rafeef Ziadah: “We teach life. Palestinians wake up every day to teach the rest of the world life, sir.”

Learn more about the campaign and get the materials to join in at the AFSC website.