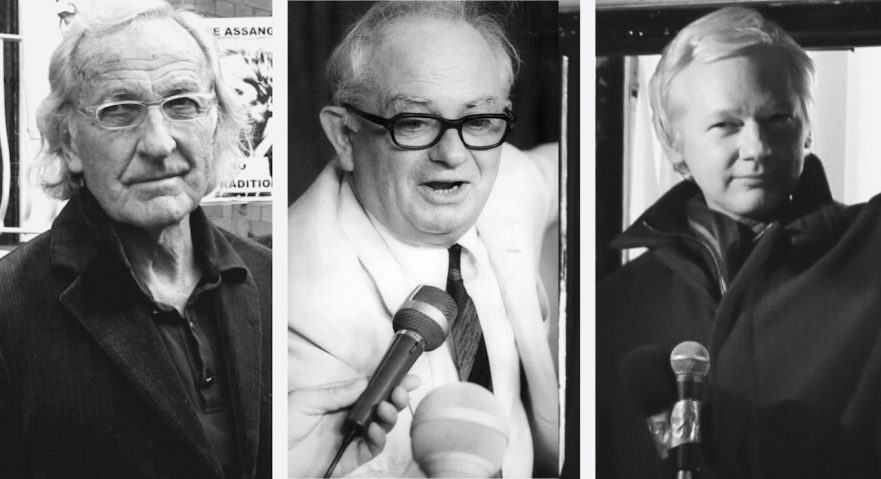 This piece, by JWE Board Member Rick Sterling, is crossposted from Mint Press News.

Wilfred Burchett lived from 1911 to 1983. He was a farm boy and his experience in the depression shaped his dislike of oligarchs and preference for the poor.  He went to Europe trying to volunteer for Republicans in the Spanish Civil War but that did not work out.  Instead, he assisted Jews escaping Nazi Germany.

Burchett became a journalist by accident. Having seen the reality in Germany, he started writing many letters to newspaper editors. One of the editors took note of his fluid writing style and intensity. They contacted him to ask if he would like to report for them. Thus began a forty year writing career.

He covered WW2, first stationed with British troops in India then Burma. Then he covered the Pacific campaign stationed with U.S. troops.  He was the first international journalist to report on Hiroshima after the atomic bomb. He evaded US military restrictions to go to Hiroshima and see reality for himself. In his story “The Atomic Plague”, published in the London Daily Express, Burchett said,  “I write this as a warning to the world” and “Doctors fall as they work”.   Immediately the US launched a campaign to smear his reputation and deny the validity of his story. The US military was intent on preventing people from knowing the long term effects of nuclear radiation.

Burchett’s report from Hiroshima was broadcast worldwide and called the “scoop of the century”. It exemplified his career based on first-hand observation and experience.

Over his 40 year career, he reported the other side of the story from the Soviet Union, China, Korea and Vietnam. He wrote thousands of articles and over 35 books.  On China, he wrote “China’s Feet Unbound” in 1952. Two decades later he wrote (with Rewi Alley) “China: The Quality of Life”.

Burchett wrote “Vietnam: The Inside Story of a Guerrilla War” (1965) “My War with the CIA: The Memoirs of Prince Norodom Sihanouk”(1974), “Grasshoppers and Elephants: Why Vietnam Fell” (1977) and then “Catapult to Freedom: The Survival of the Vietnamese People” (1978).

Burchett’s life, experiences and observations are brilliantly recorded in his autobiography “At the Barricades: Forty Years on the Cutting Edge of History” (1980). They reveal the hardscrabble youth and early years, the leftist sympathies, the decades of journalistic work based on first-hand observations.

Burchett was vilified by the establishment political leaders in Australia. His Australian passport was taken, the government refused to issue him a new one and he was barred from entering Australia. Even his children were denied their Australian citizenship. Finally, after 17 years, Wilfred Burchett’s citizenship and passport were restored when Gough Whitlam became Prime Minister in 1972.

With his unassuming and affable manner, Wilfred Burchett became friends with leaders such as Ho Chi Minh, Norodom Sihanouk,  and Chou en Lai.   Bertrand Russell said, “One man, Wilfred Burchett, alerted Western public opinion to the nature of this war and the struggle of the Vietnamese people.”

This interview gives a glimpse into the character and personality of Wilfred Burchett.

John Pilger is another extraordinary Australian journalist.  After starting journalism in the early ’60s,  he became a war correspondent covering Vietnam, Cambodia, Bangladesh and Biafra. He worked 25 years at London’s Daily Mirror and then had a regular fortnightly column for 23 years at the New Statesman.

His first documentary, “The Quiet Mutiny”, depicted US soldiers in Vietnam resisting their officers and the war. In 1974, when Palestine was often unmentionable, he produced “Palestine is Still the Issue”. Nineteen years later, he wrote the second part and described how  Palestine is still the issue.

John Pilger has written/edited over ten books and made over 50 films. He told the story of atrocities in Pol Pot’s Cambodia with “Year Zero“.  He exposed Indonesia’s stranglehold on East Timor in “Death of a Nation: The Timor Conspiracy”.  In a four year investigation, he showed how working-class victims of the drug thalidomide had been excluded from a settlement with the drug company.

John Pilger exposed uncomfortable truths about his home country and its treatment of aboriginal people. He did this through films including “The Secret Country: First Australians Fight Back” (1985),  “Welcome to Australia” (1999), and “Utopia: An Epic Story of Struggle and Resistance” (2013).  He gives more history and detail in the book “A Secret Country” (1992).

In 2002 Pilger produced and movie and book titled “The New Rulers of the World”  revealing the grotesque inequality in this “globalized” world where a few individuals and corporations have more power and wealth than entire countries.

In 2016 Pilger came out with the urgent and prescient video “The Coming War with China”.

More recently he produced “The Dirty War on the NHS” which documents the stealth campaign to privatize the UK’s National Health System. Many of John Pilger’s films can be seen at his website johnpilger.com .

In the 1960s and ’70s, Pilger’s brave and bold journalism received many awards and he was twice recognized as Journalist of the Year.  But in recent years, there has been less acceptance as media has become more homogenized and controlled.  In 2018 Pilger said, “My written journalism is no longer welcome – probably it’s last home was The Guardian, which three years ago got rid of people like me and others in pretty much a purge …”

Harold Pinter, winner of the Nobel Prize for Literature, says “John Pilger unearths, with steely attention, the facts, the filthy truth. and tells it like it is.

The third extraordinary Australian journalist is Julian Assange. He was born on 3 July 1971.  He became a skilled computer programmer and hacker as a teenager. Later he later studied mathematics and physics at Melbourne University. According to one of his math teachers he was an exceptional student but he clearly had other tasks and priorities.

Assange has edited or co-authored at least four books. For three years he worked with Australian journalist and co-author Suelette Dreyfus to write “Underground : Tales of Hacking, Madness and Obsession in the Electronic Frontier”.  First published in 1997, the Sydney Morning Herald called it “astonishing”. Rolling Stone described it as “An entirely original focus on the bizarre lives and crimes of an extraordinary group of teenage hackers.”

In 2012, Assange produced the TV series “The World Tomorrow”. Over 12 segments, he interviews Ecuador President Rafael Correa, the current President of Pakistan Imran Khan, the leader of Hezbollah Hasan Nasrallah, leaders in the Occupy movement, Noam Chomsky, Tariq Ali and many more.

In 2013, Assange and WikiLeaks produced the movie Mediastan. It shows WikiLeaks’ global travels to meet publishers of the secret documents.  In 2014 OR Books published “When WikiLeaks met Google”. It consists of a discussion between Julian Assange and Google founder Eric Schmidt plus two companions. Assange writes a 51-page introduction which puts the discussion in context: how Google and other internet giants have become part of  US foreign policy establishment.

In 2015 Assange edited “The WikiLeaks files: the world according to the US Empire” and in 2016 the book “Cypherpunks: Freedom and the Future of the Internet” was published.Assange and three other computer experts discuss the future of the internet and whether computers will emancipate or enslave us. One reviewer says, “These guys are really getting at the heart of some very big issues that practically no one (outside of Cypherpunk circles) is thinking about.”

But what makes Assange extraordinary is his work as editor in chief and publisher of WikiLeaks.  Following are a few examples of information they have conveyed to the public:

* Corruption at Kaupthing Bank in the Iceland financial crisis

* Killing of  Reuters journalists and over 10 Iraqi civilians by US Apache attack helicopter in “Collateral Murder” video.

* 92,000 documents on the war in Afghanistan (and civilian casualties previously hidden)

* 400,000 documents on the war in Iraq (including reports showing the US military ignoring torture by their Iraqi allies)

* emails and files from the US Democratic National Committee

But Assange has incurred the wrath and enmity of the US government. The “Collateral Damage” video and war logs exposed the brutal reality of US aggression and occupation.  Kofi Annan, former Secretary-General of the United Nations, said the US invasion of Iraq violated international law. But there has been no accountability.

In response to WikiLeaks’ revelations, the United States has ignored the crimes and gone after the messenger who revealed the crimes. Thus Julian Assange was confined to the Ecuador Embassy for 7 years and is now in Belmarsh maximum-security prison.  The US wants him extradited to the US where he has been charged with 18 counts of  “Illegally Obtaining, Receiving and Disclosing Classified Information”.  The extradition hearing is scheduled to begin on 24 February 2020.

Australia should be proud of these exceptional native sons. Each one has made huge contributions to educating the public about crucial events.

Wilfred Burchett reported from the “other side” when the West was waging war on Korea, Vietnam, Laos, and China. He was demonized and even called “Public Enemy Number One” during the Cold War.  But those who read his reports and many books found an accurate and objective writer. His many books stand the test of time.

From the 60s to today, John Pilger has told stories that were never or rarely told.  He has exposed facts and drawn conclusions which shame or should shame powerful forces, whether in the U.K., U.S.A. or Australia. He has documented the real heroes who are otherwise ignored.

Julian Assange is from the new generation. He has reported and published secret information about military-political power on “this side”. He has revealed truths that powerful forces do not want the public to know, even when it is being done in their name.

Now Assange is in prison and in danger of being extradited to the United States. If this is allowed to happen, it will mark a crushing setback and perhaps the death of independent investigative journalism.

John Pilger is a major supporter of Julian Assange. So is the United Nations Special Rapporteur on Torture, Nils Melzer. In a blockbuster interview, he says “I have never seen a comparable case….The Swedish authorities … intentionally left him in limbo. Just imagine being accused of rape for nine-and-a-half years by an entire state apparatus and the media without ever being given the chance to defend yourself because no charges have ever been filed.” He goes to describe reading the original Swedish documents, saying “I could hardly believe my eyes…. a rape had never taken place at all…. the woman’s testimony was later changed by the Stockholm police… I have all the documents in my possession, the emails, the text messages.”

Melzer describes the refusal of governments to comply with his requests. He sums up what is happening and the significance. “A show trial is to be used to make an example of Julian Assange….. Four democratic countries joined forces – the U.S., Ecuador, Sweden, and the U.K. – to leverage their power to portray one man as a monster so that he could be later burned at the stake without any outcry. The case is a huge scandal and represents the failure of Western rule of law. If Julian Assange is convicted, it will be a death sentence for freedom of the press.”

The three extraordinary Australian journalists were all rebels and all international. They all depended on freedom of the press which is now at stake.

Rick Sterling is an independent investigative journalist. He lives in the San Francisco Bay Area and can be contacted at rsterling1@protonmail.com