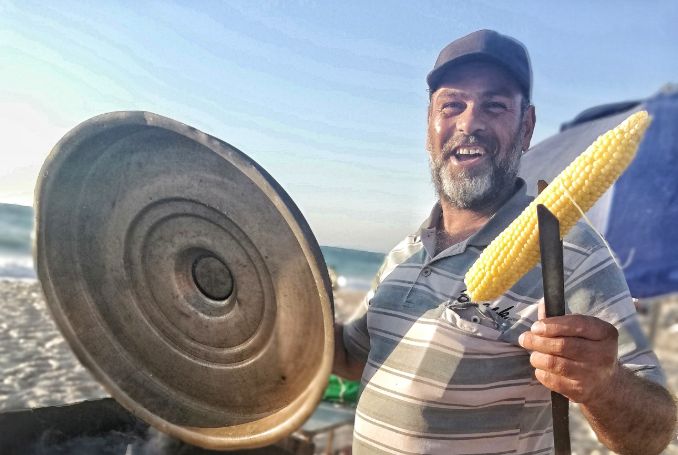 Growing up in Gaza, I developed a special relationship with street vendors. I used to enjoy the chants they used– mostly self-invented lyrics– to entice children to buy items such as corn-on-the-cob, Barrad (Gaza’s exclusively-made splashed yellow ice) and candies. I would wait for them to come over during summer, when all Gaza schoolchildren are home, so that they could sell their offerings and return back home with some money enough to feed their own children. I made friends with some of them, such as Kamal, who used to sell orchids, and who later passed away due to cancer in my Gaza refugee camp.

I indelibly remember how each of them would promote his items to the children. Once, when I was in a Māori village in Aotearoa/New Zealand with my Gaza-born friend Billy, I imitated the Gaza vendors by singing out: “Yala ya doura, maslouqa ya doura,” (‘Corn-on-the-cob! Boiled corn-on-the-cob!’) That hit his nostalgia nerve. But despite being boiled in hot water on the top of a dead volcano, the Aotearoa corn never tasted as good as Gaza’s.

Over the past 13 years, as tens of thousands of young Palestinians became unemployed thanks to the ongoing siege, the consecutive Israeli offensives, and the Palestinian political division, a growing number of them sought work as street vendors, selling new items that were not sold before, such as coffee, tea and cigarettes. The number of people working as street vendors doubled, and they could be seen at every corner selling what they could to those who could afford it.

Corn-cobs have always been sold at Gaza’s streets, everywhere, especially by the sea, where Palestinians seek to get some fresh air and to release their stress, by swimming at the sea and watching Gaza’s mesmerizing sunset. As gas is not always available and due to the fact that many of them can’t afford it, Gaza’s vendors use an open fire to boil and cook their corn, giving it a special taste. Some vendors sear their corn-cobs sending some delicious smells to Palestinians sitting by the beach just down the cliff.

Ibrahim Abu Zureik, a 47-year-old refugee from Al-Nuseirat, works at a chicken shop during the year and does an extra job of selling corn during the summer to bring food to the table of his family. He notes that “In light of the tight economic situation in Gaza, I had to sell corn, because my job has become insufficient for me and my family. I have seven children and I need money to feed them and make them happy, especially now that my oldest child is 20.”

Speaking of people’s demand of corn during the summer, he adds: “People’s economic situation is difficult. They buy the basics, and there are a few who buy corn. I make 15 NIS (almost 4 dollars) a day.” Many people come to the beach, he continues, as they seek to escape the insufferable heat of the houses in the refugee camp, made much worse by the lengthy electricity cuts.”

The story of Abu Zureik is similar to that of the Kali brothers, Ahmed and Saud, whose father died five years ago after a battle with cancer. Before passing away, he taught them how to cultivate a piece of land they inherited from him, and today, they cultivate the land, harvest corn in the summer and sell them by the Gaza beach.

“In this season in particular, things are going well for us, because we do not buy corn but plant them ourselves. We do not pay rent for cars to transfer our produce as we have built our own vehicle. People come to the beach in droves. The impact of all of this is good on our sales and we see our efforts are paying off,” they said as they stood behind their stalls.

By the beach, 20-year old Mahmoud al-Omari works at a small cafeteria, where he makes hot drinks during the winter and sells corn during the summer. From his cafeteria at the Gaza Corniche that is overlooking the sea, he brags about the high sales he makes, “because of my extended network of people from all over the Gaza Strip.”

He dreams of being able to buy a smart-phone one day noting that he has been working in this cafeteria since he was 14. “I dropped out of school and started working in this café. I am in the same place with the same ambitions that I have not achieved yet, but I hope I will be able to one day,” he concludes.

Suliman al-Hazeen is a 16-year old boy from Gaza, who sells corn during the summer at the Gaza beach. His five brothers do the same too, as all of them work collectively to save enough money for the family after their father, who used to work in construction, fell down from the third floor at one of his sites. They boil the corn at their family home that is located hundreds of meters away from the beach, put the boiled cobs in buckets and carry them to the beach. Suliman does other jobs during the year, too, such as selling cigarettes and vegetables, as well as cleaning farms so he can help his family year-round.

Today, as hope becomes a rare coin in Gaza, young people do their best to survive, even by selling corn, so they can put a smile on a face of Palestinians enjoying the Gaza beach or running away from the heat of houses in the refugee camps. They make some money that would save them the pain of hunger. But the voices of young people selling corn is no longer comforting and does not draw the attention of many as it used to. Now, it reminds them of the suffering of these people who can’t see a light at the end of the tunnel. These vendors live and work under siege, beyond the Gaza sea, hoping that someone might hear their chants and screams on the other side of the Mediterranean. They sell corn and see a mockery in their foes who block their way to the world just a few miles away in the Mediterranean. It is as if by selling corn, they dance the Haka, the traditional Māori dance of defiance in the face of enemies… just like the Māori did in the performance in Aotearoa that Billy and I once enjoyed, eating corn far from Gaza.