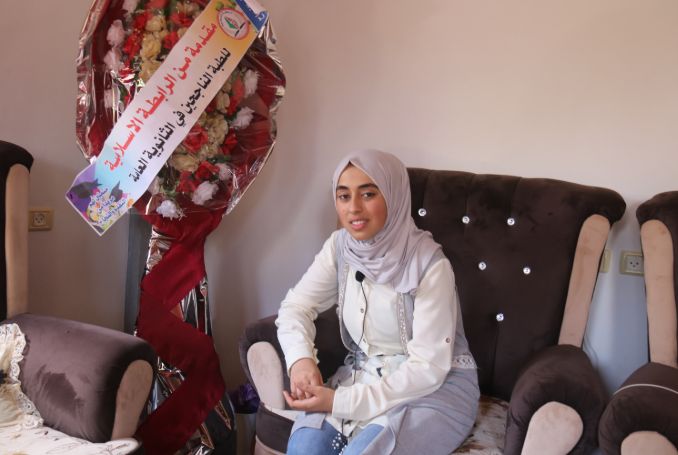 On July 18, 2019 the Ministry of Education and Higher Education in Palestine announced the results of the General Certificate of High School Examination in Palestine, known as Injaz/Tawjihi. For decades, this examination has been critical and families as well as students would anticipate it with much anxiety and pressure. Students are expected to pass with high grades so that they could proceed to university and the announcement of the names of students who got high grades has been a source of pride for families for many years.

When I sat for the high school exam in 2007, the Palestinian division between Hamas and Fatah was at its highest and students had to do the exams while fighters and security officers were exchanging fire a few blocks away from our school, adding insult to injury and making us feel more pressured. Despite this, the high school exam has always its special status among Palestinians. When the results were announced, my family brought desserts to celebrate and hundreds of people came to our house to express happiness and good luck.

Once the results are announced, fireworks and ululation would be heard, and sometimes bullets would be shot in celebration, despite the warning of security forces and community leaders. Tawjihi has always its place among Palestinians and it determined our future in many different ways. Students who do science mostly join a science department at the university and those who do arts join an arts department, and these days there are students who join vocational as well religious education.

UNRWA has provided Palestinians with a network of free schools that provided refugees with free education. This contributed to making literacy among Palestinians one of the highest in the world, exceeding 97% in the Gaza Strip and the West Bank. Yet, with the siege tightening its grip on Gaza, some students began to think that education is not the first priority. Some of them sought vocational training next to their formal education, while others left their universities altogether. Nonetheless, education still has much respect among Palestinians. The words of my father when I finished high school still ring in my ears: “Study whatever you wish, even if you want to do boxing, I don’t mind.” According to the Ministry of Education, the percentage of students who passed the high school certificate examination in Palestine this year is 69.13%. Some 75,000 students sat for the exam, of whom nearly 52,000 passed.

“I want to study physics,” Ibrahim Abuisifan, who won the 4th ranking in the Gaza Strip, and the 6th ranking in Palestine, with an average score of 99.6 (Science track), told Just World Educational. “I will not stop at a BA in physics, but I will continue my MSc and PhD studies too,” he added.

Abuisifan said he hoped that the crises the Gaza Strip is going through will be resolved soon so that the people could finally lead a normal life, especially students.

Mohammed Ahmed, who graduated with an average of 89.6% (Industrial track), expressed his interest in studying computer engineering, noting that the different offensives on the Gaza Strip have impacted students the most, pushing them to lose their concentration. He called on all free people of the world to end the plight of the Palestinian people.

Tawjihi brings painful and hopeful memories and wishes for Palestinians. When results were announced this year, many Palestinians shared on social media the results of Palestinians whose fathers were killed or imprisoned by Israel. The stories sought to reveal how these students, despite the many challenges of not having their fathers around, were able to thrive and be successful.

It must be a painful memory for those families, having to celebrate this special occasion while their fathers are not around. But sometimes it is the students themselves who are no longer alive. Back in 2007, our classmate Obaida Al-Qassas had been killed by Israel before high school results were announced. My brother, Omar was killed by Israel before sitting for the high school exams: during the exam, his registration card for it was placed on an empty desk. His friends checked his desk with teary eyes while they wrote their exams, and I remember how painful it was for my family to observe the results after my brother was gone.

Despite everything– despite the occupation, despite the pressure, both by difficult life conditions and families– Tawjihi has a special taste in Palestine. It is a day of celebration and hope. It is a day of telling everyone out there that Palestinians will continue to seek education, despite Israel making it difficult for them to go to universities due to checkpoints, despite Israel bombing their schools and arresting students and lecturers, despite the siege and blocking many students from traveling abroad to seek education. Tawjihi will continue to be important in the life of Palestinians and fireworks and ululations will be heard to remind everyone out there that an educated nation can’t be defeated and the intellectual will always lead the fight.

Just World Educational is honored to have been able to conduct and share an exclusive interview with Nour-Al-Huda Izzat Khadoura, the student who won the first ranking in the Gaza Strip (the second ranking in all of Palestine) with an average of 99.3% in the Arts track. She was a student at Deir Al-Balah Martyrs’ High School for Girls.