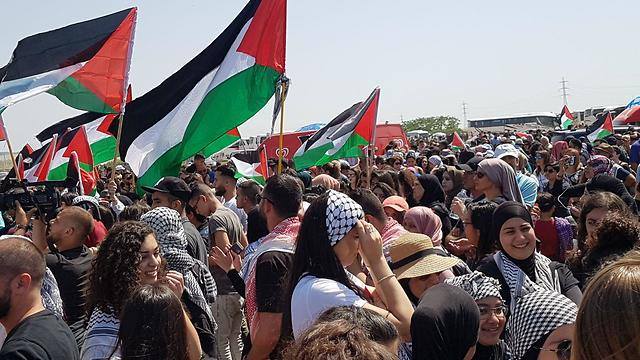 [We are pleased to publish this statement, received from Gaza this morning. The list of signing organizations is at the bottom. ~Editors.]

A statement by the Palestinian Islamic and National Factions

We condemn in the strongest terms holding the annual Eurovision Song Contest this year in Tel Aviv, which is built on the ruins of our destroyed villages after displacing its inhabitants by force, such as the village of Sheikh Mouannis and Manshiyya.

We believe in the great role art and music play in human dialogue, bringing peoples closer together and promoting coexistence and stability, but this is not a justification for anyone to use art and music to whitewash the crimes of the occupation.

At the time this competition is being held, the Israeli occupation continues to commit crimes against our people, their heritage and sanctities, especially as it coincides with the 71st anniversary of the Nakba, which is still ongoing around the clock, with sole and specific goal of cleansing the land of its inhabitants and stealing what remained of it.

This event also coincides with the 1st anniversary of the massacre committed by the Israeli occupation against our besieged people in the Gaza Strip for more than 13 years. On May 14 last year, about 72 Palestinians were killed and more than 3,000 wounded. In addition, at the time of the festival, more than 6,000 Palestinian prisoners are held in inhumane conditions behind the Israeli bars, including hundreds of children, women and the sick.

Therefore, we call upon the European countries to stop supporting this entity at the expense of our people and their rights, covering up its crimes and treating it as a state above the law by immediately retreating any activity that supports this racist entity.

Our people love life and want to live like other peoples of the earth peacefully on their land and in their homeland, to contribute to the manufacture of human civilization, but how can we achieve these goals while the fascist and racist occupation is still controlling our land? We therefore call upon all the free people of the world and lovers of justice and peace to support us in our just struggle for freedom, independence and return.

In conclusion, we affirm that the holding of this festival in the occupation state will not bring them security or stability, nor will it whiten their page soaked in the blood of our people, or falsify the reality of this rogue state.

We extend our thanks and appreciation to all parties who have responded to the demands and efforts of BDS activists around the world to boycott this festival in support of our people.