In the first episode of our special mini-series of podcasts on Israel’s “Operation Cast Lead” assault Gaza ten years ago, the distinguished international jurist Richard Falk discussed the “cruelty and excessive violence” of that assault with JWE President Helena Cobban. That cruelty and violence were, he said, “used to really terrorize the Palestinian population in Gaza”, and to persuade them to repudiate the Hamas authorities who were governing Gaza then, as now.

This podcast mini-series is part of JWE’s #CastLeadPlus10 information campaign, in which we are exploring the record, the many legacies, and possible lessons of that Israeli attack on Gaza, ten years later.

At the time of “Cast Lead”, Falk was the UN Human Rights Council’s Special Rapporteur for the Occupied Palestinian Territories. Though Israel wouldn’t let him into Palestine, he watched closely from afar as, for 22 days, Israeli forces pounded the extremely densely populated Gaza Strip from air, sea, and land. 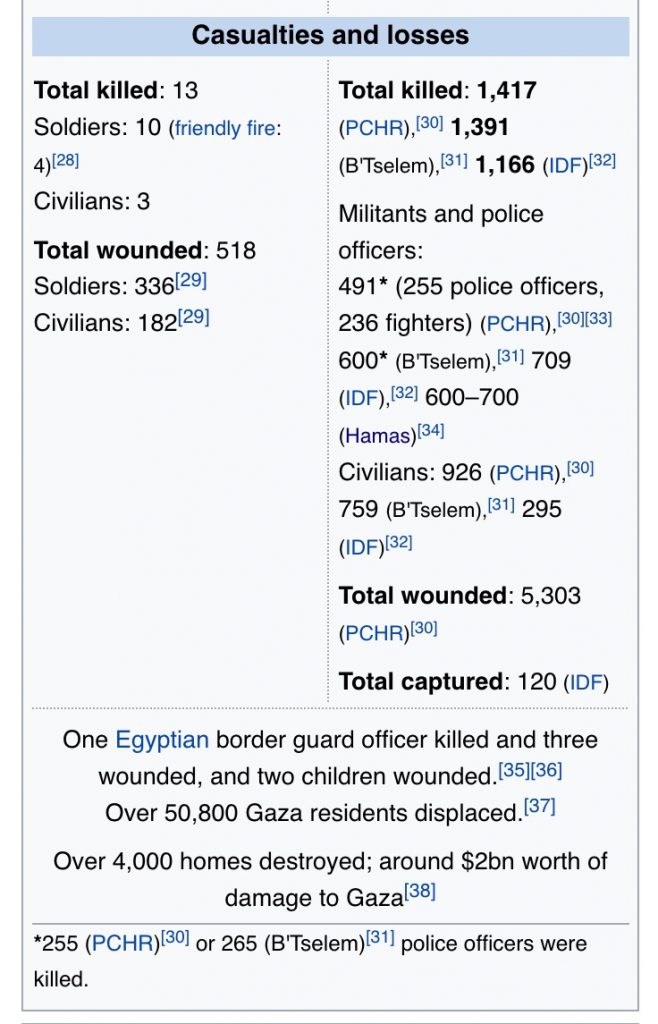 Three Israeli soldiers were also killed by “friendly fire.” The summary of casualties and losses recorded by Wikipedia is at right. (In the initial two columns, Israeli losses are on the left and Palestinian ones on the right.)

Assessing the imbalance in these casualty figures, Falk said they “do remind one of colonial wars or the wars between early American settlers and the Native Americans.” Israel’s behavior during Cast Lead was, he noted,  “characteristic of Israeli reliance on force for suppression of the Palestinian people as a whole since 1948.”

Regarding the use by Hamas and its allies of rockets and mortars against targets inside Israel, Falk said, “Hamas [and its allies] used the weapons they had, which were primitive and not targetable. They were indiscriminate, which was problematic, but they were not targeting civilians.”

He referred to question of the right to resist foreign occupation. He also noted that the UN’s relatively recently adopted “Responsibility To Protect” (R2P), which was later invoked by Western powers regarding Liubya in 2011, could perhaps have been invoked to protect the people of Gaza during the 2008-09 assault on them– “But the United States would have vetoed that.”

This episode of the podcast was a fairly in-depth consideration of what actually occurred during Operation Cast lead. In a subsequent episode, to be released December 30, Falk and Cobban discuss such legacies of Cast Lead as the Goldstone Report and the mobilization of global civil society spurred by Cast Lead– a mobilization which led to the organizing of several international aid flotillas to Gaza and the strengthening of the worldwide BDS movement.

Also, please donate to Just World Educational if you’re at all able to do so! Information for how to do this is available here.