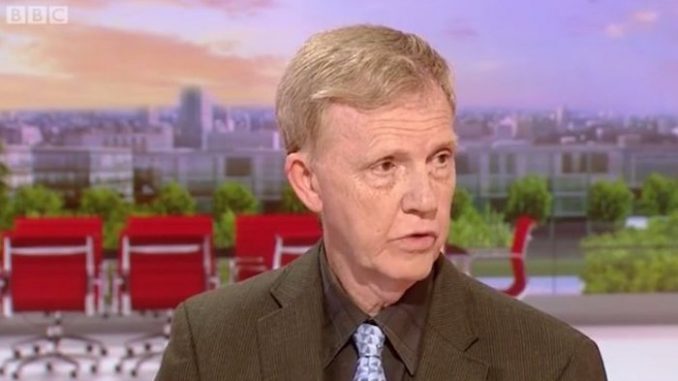 Peter Ford, who was Britain’s ambassador to Syria 2003-2006, gave a scathing assessment of the work of Syria’s Western-backed “White Helmets” organization and  other aspects of Western countries’  regime-change project in Syria in an audio interview published on JWE’s podcast series on July 27.

“The White Helmets are jihadi auxiliaries,” he told JWE president Helena Cobban at the very start of the 30-minute interview. “They are not, as claimed by themselves and by their supporters… simple rescuers. They are not volunteers. They are paid professionals of disinformation.”

He proceeded to note the huge size of the organization’s “press department”, saying,

This gives us an idea what the priority is for this very dubious organization… All their activities are directed at mobilizing Western opinion behind the jihadis with whom they associate. They co-locate their centers with the Al-Qaeda organization known as Al-Nusra and with other militant groups such as Jaish al-Islam. They have in the past been shown associating with and waving the flags of ISIS.”

Ford voiced these (and other) criticisms of the White Helmets less than two days after a large of WH employees and their families were evacuated from Southern Syria by Israeli troops stationed on the Israeli-occupied portion of Syria in the Golan Heights, from where the Israeli military bussed them to Jordan, where they await relocation to the United Kingdom and other Western countries.

His analysis of the WH was just one of numerous intriguing judgments and analyses about Syria and Palestine Ford shared during the 30-minute interview, all of which is worth listening to.

In 2006, when Ford’s ambassadorial service in Damascus ended, he retired from the Foreign Office and then served the next eight years as the chief representative of the head of the UN agency UNRWA to the Arab world. For that period, he was based in Amman, Jordan and traveled throughout the Arab world, including on a number of occasions to Syria, which is host to more than 500,000 UNRWA-registered Palestinian refugees living in nine longstanding “refugee camps” as well as scattered everywhere else throughout the country.

In many of these areas including the very large Yarmouk refugee camp, Syria’s Palestinian residents have been very badly impacted by the conflict that has wracked the country since 2011. Ford was one of the few outside observers able to track their situation. In the interview, he noted that Yarmouk was taken over by jihadist armed groups including ISIS, Jabhat al-Nusra, and Jaish al-Islam, “but it was a very confused situation.”

He noted that in some of the Palestinian camps, Hamas fighters who had long been present there fought “heroically” against ISIS, but were “put to the sword” by them.

Ford shared some intriguing memories of his earlier time as UK ambassador in Syria, noting that that had coincided with a period of tentative political liberalization in the country. He recalled that as ambassador, he had met and hosted a number of Syrian opposition figures, whom he described as “brave, but reckless.” He said he tried to provide them with some diplomatic protection, noting that at that time, the opposition members visible and active in Damascus were all secularists of one kind or another, either communists or liberals.

That period of tentative liberalization did not last long, he noted. It was brought to an abrupt end after the U.S. invasion of Iraq, which heightened fears that after Washington had “pacified” that country it would next turn its attention to attempting regime change in Syria, and also by the anti-Syrian agitation that erupted in Lebanon after the early-2005 assassination of that country’s former Prime Minister Rafic Hariri, which was widely blamed on Syria and its allies.

Ford also provided his analyses of the situations in Palestine (where he saw neither a two-state nor a one-state situation coming any time soon) and regarding Israeli-Syrian relations. Regarding the long-unresolved conflict– actually, still formally a state of war– between Syria and Israel, which has occupied Syria’s Golan Heights area continuously since 1967, Ford said that recent developments had brought the Golan issue back to the top of the international agenda, “for the first time in decades.”

He noted that for many, many years the biannual renewal of the mandate of the UN’s Disengagement Observer Force on Golan (UNDOF) had occurred almost automatically, without the Syrian government or any other party seeking to have any discussion at the U.N. Security Council of the resolutions underlying UNDOF’s mandate, especially resolutions 242 of 1967 and 338 of December 1973, both of which reaffirm the inadmissibility of the acquisition of territory by force and call on Israel therefore to withdraw from Golan.

In 1981, the Israeli Knesset annexed Golan to Israel, but that act of Anschluss, like the parallel one applied to occupied East Jerusalem, has never been recognized as valid by the United Nations or most of the governments of the world.

Ford recalled that back when he was the U.K.’s ambassador to Syria, it seemed that Damascus was always very eager to do nothing that might provoke any Israeli bombing of their country (such as Israel often showed itself quite happy to do against, for example, Lebanon or Gaza.). But amidst the very complex conflict that has wracked Syria since 2011, Israel has bombed Syria more than 100 times– “so psychologically and militarily this changed the situation in Syria,” he said.

In. the interview, Ford also warned that the White Helmets were already preparing “another staged chemical weapon incident” in Idlib, the portion of northwestern Syria where, under partial Turkish protection, the last remnants of all the country’s jihadi fighting groups have been gathering.

As noted above, however, the whole of the 30-minute interview is well worth listening to.