The United Nations has been involved in the affairs of the Gaza Strip almost since the organization’s founding in 1945. UN negotiators oversaw the negotiations that in 1949 led to the delineation of the Strip’s boundary with Israel. Until 1967, UN peacekeepers and truce monitors oversaw that boundary (which has never been never a formally recognized international border.) UN relief workers have had a strong role since 1949 in providing services to the refugees and others in the Gaza Strip… 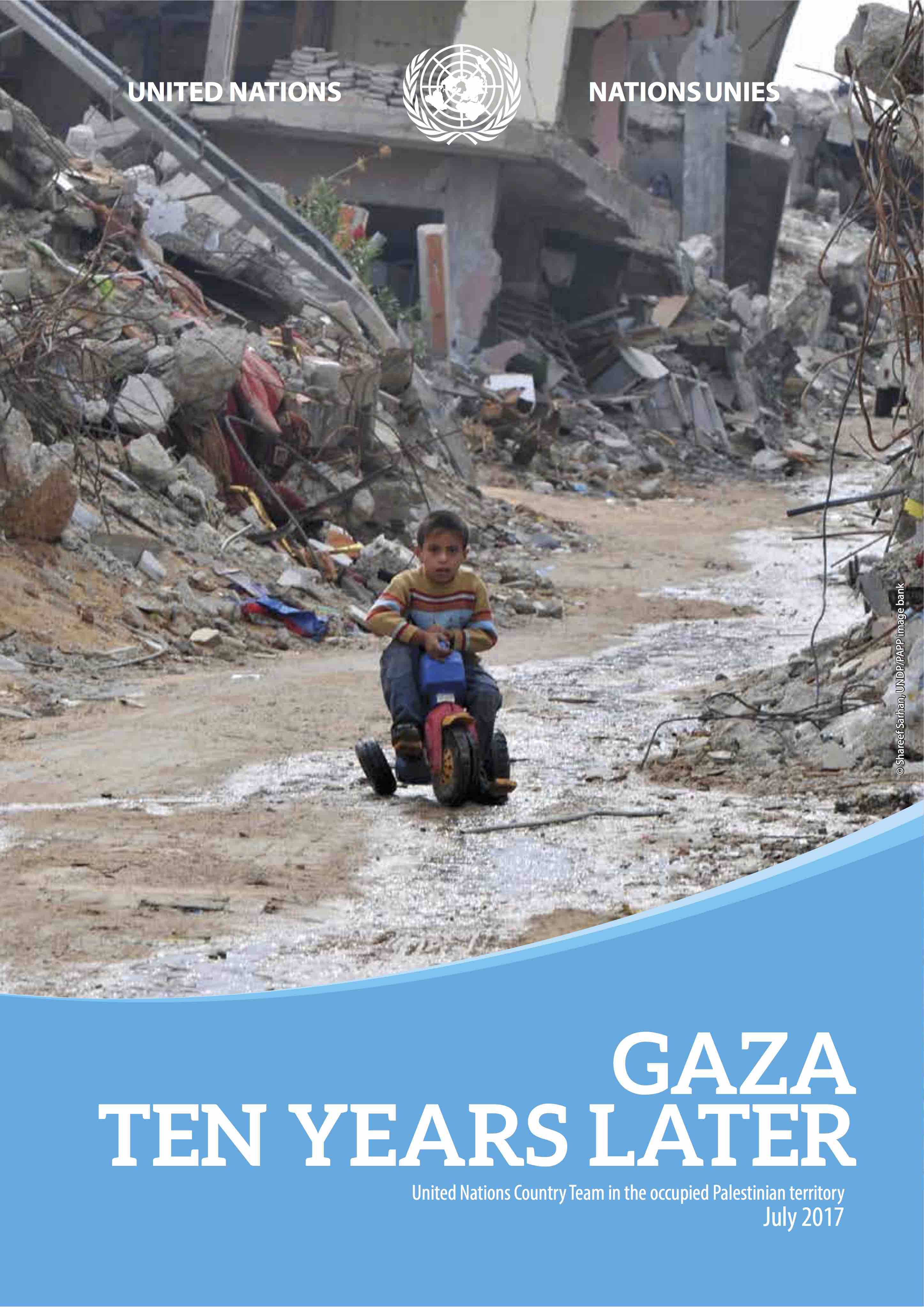 In the past week, two UN bodies have come out with strong reports about the ongoing (one should now even say escalating) humanitarian crisis in Gaza. The UN’s “Country Team for the occupied Palestinian territories” published a report titled “Gaza Ten Years Later” (PDF here)– later than Israel’s 2007 escalation of its siege against Gaza, that is. And the UN Development Program issued a report titled “Three years After the 2014 Gaza Hostilities” (PDF here.)

Both reports paint the same, very grim picture of the situation in Gaza. The UNCT’s “Ten Years Later” report (TYL) is more explicit than the UNDP report in naming the situation as “de-development”– a term that definitely implies a lot more agency than the UNDP’s more milquetoast word “decline”. The TYL report is also much more forthright than the UNDP report in noting that Gaza is still considered under international law to be territory under Israeli military occupation (despite Israel’s pullout of its settlers and partial pullout of its military in 2005), and thus that under the Fourth Geneva Convention, Israel still retains its responsibilities as Occupying Power for the welfare of the civilians who make up the vast  majority of the Strip’s two million residents.

The TYL report also invokes the Fourth Geneva Convention’s strong prohibition against the application of collective punishment against residents of any occupied territory (which the UNDP report does not.)

Another shortcoming of the UNDP report is that its authors seem to have drunk the neoliberal Kool-Aid in that they think that private-sector economic growth will be the best thing to pull Gaza out of its misery– if only all the various actors in Gaza would let the private sector blossom!

The TYL report is much more matter-of-fact in noting in detail how many more doctors, nurses, teachers, and classrooms will be needed to provide even basically acceptable services to a population in Gaza which is now projected to increase to 2.2 million by 2020.

This very informative table is from page 3 of the TYL report: 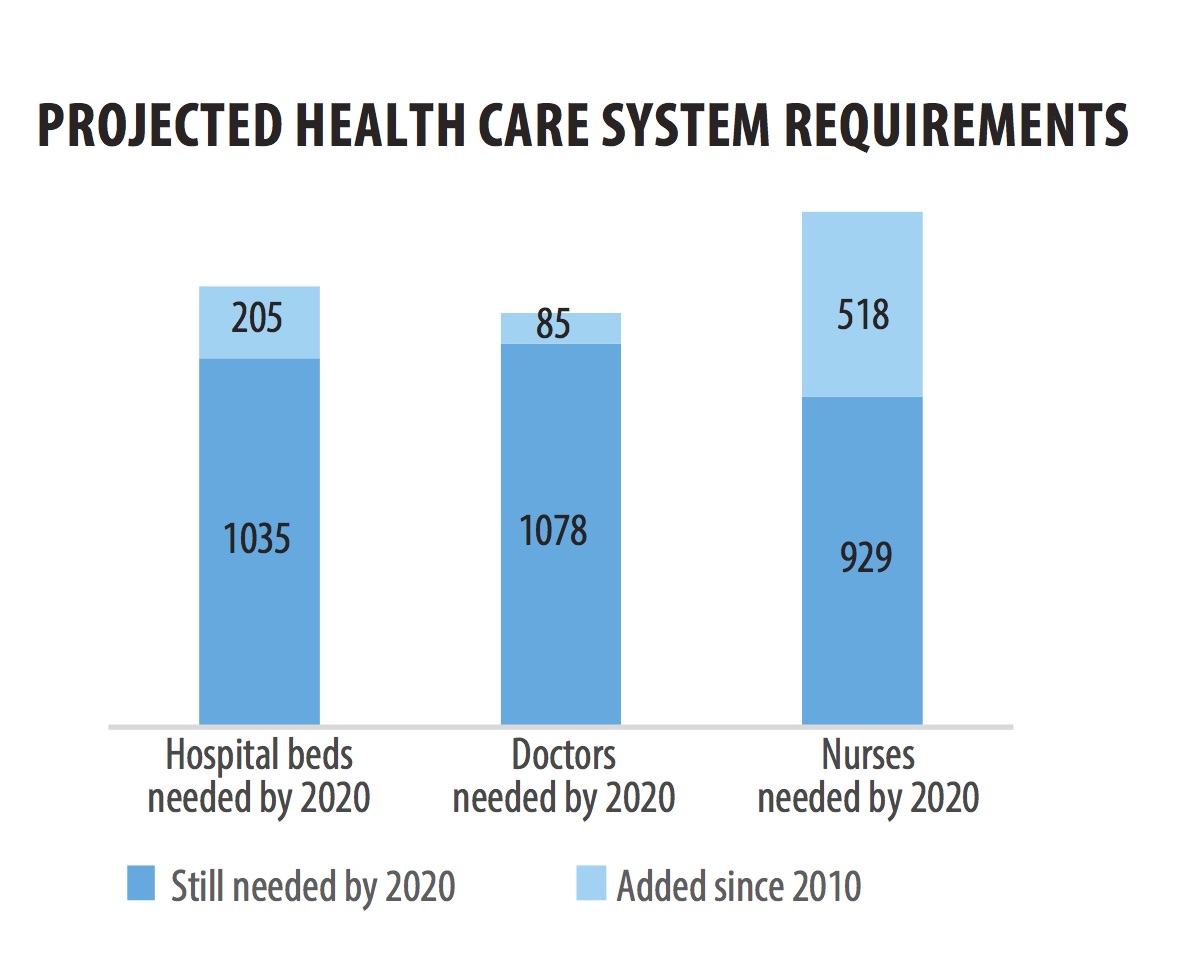 It is very unclear how, if urgent, basic needs like these are to be met, the private sector could do it?

So the TYL report is definitely worth reading and referring to.

However, it does have some serious shortcomings of its own, too. For example, in section 3, on the impact that various political factors have had on the “de-development” of Gaza, it gives a very full (and actually, informative) description of the impact that internal Palestinian divisions have had on this– and it gives this description before it describes the impact of the closures imposed by Israel. But if Israel has the responsibilities of an Occupying Power, surely Israel’s actions should have been examined first? (Plus, as we know, Israel has absolutely been a major factor stoking the intra-Palestinian differences all along.)

Then, on p.8, the report gives a generally helpful and informative outline of the three “phases” of movement restrictions that Israel has imposed on Gaza. But here again, the usefulness of the information is marred by a broader mindset that seems determined to bow to the Israeli narrative on events as much as possible. Specifically, in its description of each of these “phases”, the report’s authors feel obliged to include a sentence reporting how many missiles were sent from Gaza to Israel in that particular period– with zero corresponding mention of the number of missiles, bombs, heavy artillery shells, naval artillery shells, guided missiles, etc etc had been sent by Israel into Gaza in those same periods…

The result (as in so much of the reporting of the Western mainstream media) is that the impression is always given that it is the Palestinians of Gaza who are “violent”… with the clear implication being that because of that violence somehow Israel is “justified” both in using its own massive physical violence against Gaza and in maintaining and constantly tightening the restrictions it places on the Strip’s people. Also, that any violence that Israel uses is always “in response to” the Palestinians’ (apparently quite unprovoked!) acts of violence.

At one point on p.11, the TYP report even parrots the custom of the Western MSM by saying baldly that Israeli incursions and airstrikes against Gaza are “in response to rocket fire from Hamas in Gaza.”

Firstly, this is by no means always the case, and the authors of the TYL report are quite wrong to state it thus.

Secondly, if the acts of one side are described (and by implication also justified) as being “in response” to acts undertaken by the other side, why are the acts of the Gaza Palestinians not always similarly described– as being “in response to” 50 years of brutal military occupation (whose maintenance in power is achieved absolutely through the application of massive violence); continuous quite unlawful acts of collective punishment imposed on the population of Gaza; and so forth?

Like any population of a territory under belligerent military occupation, the population of Gaza has the full right under international law to resist that occupation by any means necessary. Using military means may or may not be the wisest course for the political forces in Gaza. (For its part, Hamas has made considerable steps over many years to be included in the political process of peacemaking between the Palestinians and Israel; but with the single exception of the parliamentary elections of 2006– which it won– its efforts at political inclusion have always been rebuffed.)

But for a UN body to portray the (actually, very small-scale) violent acts of Hamas and other Palestinian forces in Gaza as being somehow illegitimate and beyond that as somehow “justifying” Israel’s massive and continuing application of violence against Gaza seems to me to be very unhelpful.

I do realize that, since Israel is in such an overwhelmingly strong position in the occupied Palestinian territories, all entities that carry out humanitarian/relief missions in those territories, including UN entities, need to be careful not to anger the Israeli authorities too needlessly. But guys! You are the United Nations! Can’t you stand up for your core principles? Why do you need to engage in such craven acts of Israel-appeasing wordsmithing as including those (really pathetic, and wholly one-sided) “counts” of missiles sent from Gaza into Israel in your report, when they add nothing to it?