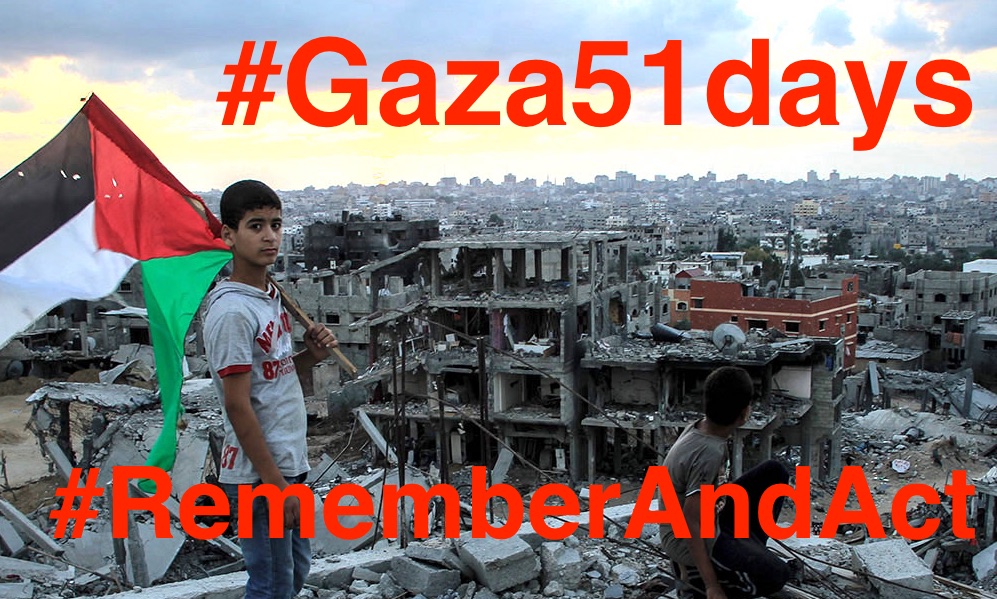 From July 7 through August 27, Just World Educational will be running a broad campaign of public information about the situation of the two million Palestinians trapped in Gaza. We aim to increase the understanding of world publics about these people’s plight and its causes, and to bolster the efforts that Palestinians and their allies around the world are making to end Gaza’s suffering.

This campaign will mark the anniversary of the 51-day military assault that Israel launched against Gaza three years ago, in July and August 2014. We will pursue it largely online and through social media. It will have one major hashtag: #Gaza51days, but we’ll also use other hashtags along the way, including #EndTheBlockade, #GazaUnlocked, #RememberAndAct, and so on…

We invite you to contribute to and amplify the #Gaza51days campaign in any way that feels comfortable to you!

The campaign will be divided into three phases, each lasting about 17 days:

In the first phase, we will expose the many levels of suffering that continue to be inflicted on Gaza’s residents to this day– from the current, draconian power cuts, through the limitations on rebuilding after the string of assaults Israel has launched against Gaza since 2006… through the deeply anti-family restrictions on travel… and back to the Nakba of 1948 which sent/concentrated so many Palestinians from elsewhere as refugees into Gaza…

In the second phase, we will point to humanitarian types of actions that concerned people around the world might take to ease Gazans’ suffering. This part of the campaign will also look at the limits on how useful any purely “humanitarian” action can be in a situation in which the Israeli occupation forces control every basic aspect of life in Gaza– and Israeli entities even profit handsomely from aid shipments sent into their totally captive market in Gaza.

In the third phase, we will explore nonviolent political actions people can take to help end the sufferings of the Gaza Palestinians once and for all. This phase of the campaign will require a clear-eyed and informed understanding of the political forces that cause the  catastrophe in Gaza, so we’ll also be providing and pointing to strong analysis of the politics of the Gaza crisis throughout the whole of the #Gaza51days campaign.

We’re also hoping to stimulate (and host) vigorous discussions, both online and “in real life”, of which kinds of campaigns, coalitions, and organizing slogans can be most effective.

Here’s how we’ll be organizing the #Gaza51days campaign, and how you can join with it:

** Here on the Just World Educational blog: We’ll have a regular series of posts on the campaign’s themes, here in this stream on the blog.

What you can do with/at our blog:

** Over at our Just World Educational Facebook page: We’ll be sharing content and resources broadly (our own and other people’s– with due attribution, naturally!)… and interacting with all the Facebook “community” to build momentum for the campaign and have some great discussions about the best way forward.

What you can do:

** Over at our @JustWorldEd Twitter feed: We’ll be keeping a lively conversation going, sharing content and resources broadly (our own and other people’s– with due attribution, naturally!)… and generally building momentum for the campaign. We will also use the Twitter space to do as much as we can to memorialize those killed in the 2014 assault.

What you can do:

We look forward to joining with a powerful coalition of friends around the world in renewing our commitment to #RememberAndAct during this #Gaza51days campaign. Please join us!